On the 28th May 2012, this American-Finnish celebrity chef Sara La Fountain struts the streets of Malaysia to cook up a storm for the fourth edition of the Celebrity Chef Series jointly presented by American Express and the Asian Food Channel (AFC). From 28 May to 29 May 2012, Chef La Fountain will play host to a series of exclusive dining related experiences as part of the tour titled, A Taste of Finland with Sara La Fountain.

Maria Brown
Co-Founder and Chief Executive Officer of the Asian Food Channel
“We want to provide our viewers and food enthusiasts with the best gastronomic experiences, that extends even beyond our great television programming. These dining experiences with American Express have been a tremendous success and we’re extremely excited to have Sara enthrall Singaporeans with her unique take on Scandinavian dishes, which will add to the many cuisines offered in this food-loving nation.”

Lim Su Ching
Vice President, American Express Business, Maybank
“American Express has always strived to be at the forefront of providing cardmembers with exceptional and unique dining experiences. The Celebrity Chef Series, does just this by bringing worldrenowned celebrity chefs from all over the world to Malaysia, where they whet cardmembers’ appetites with their tantalising dishes and culinary delights! This time, Chef Sara La Fountain, will showcase a plethora of traditional Scandinavian flavours which will surely provide her American Express fans a once in a lifetime dining experience.”

Away from the camera, Chef La Fountain runs a catering service and a cooking school. She also maintains her own blog, Passion for Fashion & Food and is a food columnist for several newspapers and magazines in Finland. As an author, Chef La Fountain has also published several books – A la Sara, her first book, earned her the prestigious Gourmand World Cookbook Award in the “Best First Cookbook” category. For this edition of the Celebrity Chef Series, cooking demonstrations and dinners will be hosted at The Royale Chulan Kuala Lumpur.

Celebrity Chef Sara La Fountain visit Malaysia in May 2012 for the Fourth Installment of Celebrity Chef Series. Guest star of “Perfect Day” and “New Scandinavian Cooking” has whipped up some uniquely Scandinavian dishes in a series of culinary events.

Summer Pavlova with Passionfruit Cream served with Strawberries and Pistachios

Sara La Fountain Biography
Not just a pretty face, American-Finnish cooking sensation Sara La Fountain works hard in the kitchen as well as the runway. Currently starring as one of the hosts on New Scandinavian Cooking airing on the Asian Food Channel, Sara trained at The Culinary Institute of America, the world-renowned culinary school in New York. Besides being able to whip up delicious meals, Sara is also a fashion model, and has represented brands such as Marrimeko and Puma. It is no wonder why she captivates the hearts and tummies of AFC viewers.

In Finland, where Sara is based, she is a popular media personality and has her own cooking show, Avec Sara. Besides being a well-liked cooking TV host, Sara has also published several books. Her first cookbook, A la Sara, earned her the prestigious Gourmand World Cookbook Award in the "Best First Cookbook" category.

Since then, Sara has also released recipe book, A Perfect Day, which features three other Scandinavian chefs from the popular television show, A Perfect Day. After four years of hard work, Sara launched her second cookbook titled Passion for Food, which focuses on food that is easy to prepare and influenced by the different seasons in Finland.

Food is truly where Sara’s passion lies. She runs a catering service and a cooking school that can be tailored to different occasions. Her school’s objective is to teach how to prepare new dishes and cocktails while remembering that the kitchen should always be a fun place. Sara also runs her own blog, Passion for Fashion & Food and serves as a food columnist for several newspapers and magazines in Finland.

In 2010, Sara created various new dishes for the Cooking with Finlandia Vodka dinners, a benefit dinner that focused on sustainability and slow food principles, and all ticket sales were donated to Slow Food USA. She is also currently designing a signature line of dinnerware called Á la Sara for the Finnish kitchenware company, Luhta Home and also a line of professional kitchen shoes with colourful prints for the Swedish company, Ejendals.

American Express Cardmembers will enjoy exclusive benefits that include preferential rates at up to 20% discount for all Celebrity Chef Series events, and events organised solely for American Express Cardmembers. For more information on A Taste of Finland with Sara La Fountain, please visit the AFC Studio website, www.theafcstudio.com, starting from 25th April 2012. Registration for the public cooking demonstration and dinner will start from 7th May 2012. 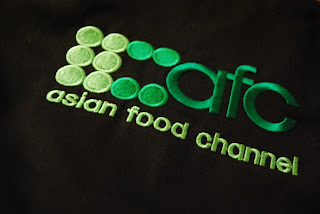 About Asian Food Channel
The Asian Food Channel (AFC) is the region’s first 24-hour food channel dedicated to airing the best food and lifestyle programming from around the region and the world. Based in Singapore, AFC’s wide Asian distribution footprint covers ten territories and 45 million viewers, on basic tiers of all the major pay TV platforms across Southeast Asia. The channel leads the ratings in its territories, regularly achieving the #1 lifestyle channel in terms of popularity and loyalty. It has achieved a broad following from young teenage food lovers and empty nesters to trendy urban females and aspiring male chefs. AFC’s online presence supports the channel with programme information, recipes, original content and an e-commerce store. As such AFC regularly executes 360 degree advertising and marketing campaigns and solutions for leading FMCG, Financial and Travel brands.