Showing posts from August, 2016
Show all

Known for its quiet back streets and beautifully preserved Ancient Town, Hoi An, on Vietnam’s central coast line, also lights up in colour once a month when locals and curious travellers join together to celebrate the lantern festival. The monthly institution in the UNESCO World Heritage Site of Hoi An bursts to light on the 14th day of every lunar month when the moon is brightest.
Post a Comment
Continue Reading...

AcroYoga is the combination of Yoga, acrobatics and Thai massage. This combination of Yoga and acrobatics is not only athletic but also aesthetic. In this different form of activity, in addition to an intense workout, the benefits of three ancient disciplines are also incorporated.
Post a Comment
Continue Reading... 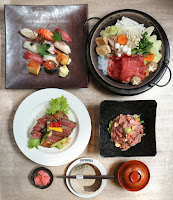 Shangri-La Hotel, Kuala Lumpur presents new lunch and dinner menus at its Japanese restaurant, Zipangu. They feature traditional and unique dishes, and premium ingredients from Japan and around the world.
Post a Comment
Continue Reading...

Kota Kinabalu’s electronica artist, Rozella – one of the three Tiger Jams finalist – has been handpicked by Chvrches for a special Tiger Jams collaboration. Written with some guidance from electropop prince Darren Ashley, Rozella’s track Home To You is a song about the contrast of “being in the big city with bright lights and missing the serenity of home and island life.”
Post a Comment
Continue Reading... 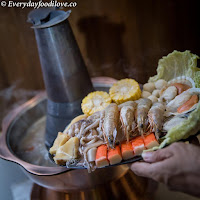 This new Thai restaurant opened 6 months ago at Plaza Manjalara, owned by a Malaysian with a Thai wife, serves good Thai food, Mookata and steamboat. Mookata is a Thai barbecue steamboat originated from Northern Thailand, ‘Mookata’ loosely translates from Thai meaning ‘pork’ and ‘skillet’. Interesting way to eat Mookata, pork lard is used to grease the metal skillet, which you then use to grill the meats. The surface eventually gets really charred though. Clear pork bone soup is poured into the moat surrounding the skillet. Traditional Mookata in Thailand just use plain water, but the version in Malaysia has been tweaked to use broth. The light clear soup allows the broth to easily take up the essences of the grilled meat juice that flow down, mixed well with the boiled vegetables in the broth to create a flavourful and rich taste in the soup.
Post a Comment
Continue Reading... 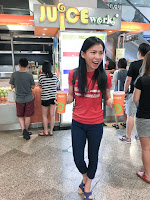 It's been awhile! Work has been so hectic lately and I haven't had the time to grab any of my favourite juices until today. There was a particularly long queue today at the Juice Works at Mid Valley. It turns out that Juice Works is having a Pokemon Trainers promotion for a week. The promotion started on Friday. All you Pokemon Go Players, be sure to visit your nearest Juice Works today!
Post a Comment
Continue Reading...

If you are looking for a stylish place to wine and dine, where your fare comes in ingenious and convenient servings, look no further than Tiki Taka. At first glance, one could have mistaken the name of this sleek establishment as belonging to a Spanish football club. While nothing could have been further from the truth, there is no mistaken the intent of the restaurant as one eats their way from dish to dish in glee. It is like a passing game of football, only with fork, plates and knives and an amazing array of fares.
Post a Comment
Continue Reading...

An authentic place of ART blend in with the sweet aroma of self-brewed Coffee offers a uniquely cozy ambience for the peace and fun lovers. The whole Studio features varying design concepts with different lighting and artistic decoration themes outlook let patrons select their own choice of a corner to sit in. Every month they will display art pieces from different artists from all around the world. If you like any of the artefacts and furniture in this cafe, there are all for sale.
Post a Comment
Continue Reading... 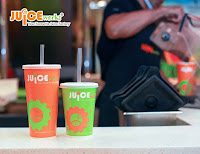 Malaysia’s premier fresh fruit juice and smoothies company launches a revitalised menu. As part of its constant quest to deliver delicious ways for people to consume more fruits and vegetables in their daily diet, Juice Works Malaysia proudly launches its colourful new menu that is chockfull of tempting treats with fabulous flavours! Expect to find these and much more on the vivid new menu available at every kiosk.
Post a Comment
Continue Reading... 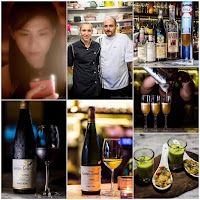 Chef Alexy Fuchs returns to the Mezza Wine Bar and Bistro to delight patrons with his distinctive approach to French cuisine. Together with Mezze’s Executive Group Head Chef Yves Pierre Renou, they enchanted guests for a week long with a special menu featuring a tantalising array of gastronomies from the Alsace region, each specially prepared and infused with the Kronenbourg 1664, the fifth oldest beer brand in the world.
Post a Comment
Continue Reading...

FROM FARM TO TABLE WITH CHEF RÉMY AT LAFITE, SHANGRI-LA HOTEL, KUALA LUMPUR 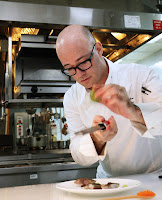 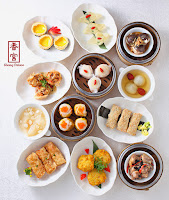 Shang Palace at the Shangri-La Hotel, Kuala Lumpur has introduced new varieties of delectable pork-free dim sum. These make up more than 50 varieties of dimsum to choose from for a delightful lunch daily or Sunday brunch at Shang Palace.
Post a Comment
Continue Reading...

Sri Lanka, August 2016: Sri Lanka’s award winning resort, which opened its doors in December 2015 and has to date received numerous awards and recognition from leading international luxury publications for service excellence, is proud to appoint Mr. W.H. Duminda Boteju to the position of Chef Concierge.
Post a Comment
Continue Reading...

Anantara Mai Khao Phuket Villas and Anantara Layan Phuket Resort have taken luxury to the next level by popping open the bubbly for guests on a personally tailored day trip with free flowing Krug Champagne aboard your very own private yacht. Accommodating up to 12 people, The Krug Cruise offers a fully crewed 90-foot Sunseeker yacht named Major Affair, return transfers to and from the resort and the marina, breakfast and a sumptuous lunch created by your very own personal on board chef, plus free flowing Krug Champagne served all day long by Anantara’s esteemed Wine Guru.
Post a Comment
Continue Reading... 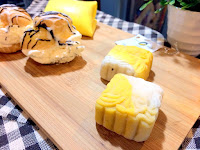 Promenade Hotel Kota Kinabalu’s team is bending the rules a bit on its No Durian Policy by having “Durians” in the hotel Only for this month of August at its Promenade Café, Dynasty Restaurant and Deli Corner.
Post a Comment
Continue Reading... 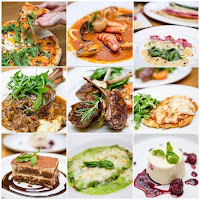 Have you ever tried Squid Ink Fettucine before? No? Then follow us on this month’s adventure, as we return to the Nexus in Bangsar South to pay a visit and check out the latest FnB outlet to hit the scene, Fratello Italiano Ristorante! Opened on the 16 May 2016, Fratello is located on the first floor of the Nexus. You can’t miss it, it is just after the escalator. It is a big place, with two sections devoted for patrons, the first being an air-conditioned area and the second a spacious alfresco styled-area. The atmosphere of the place was warm and inviting while the staff themselves are attentive to your needs. If you are looking to have some good Italian food, come on over to the Fratello Italiano Ristorante.
Post a Comment
Continue Reading... 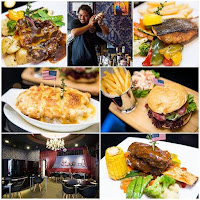 At Njoy Planet Cafe, you will have a pleasing good American food in a fun atmosphere where old-fashioned courtesy and service is always on the menu. Open daily from 11:30am till 2:00am, offer a heaping assortment of freshly-prepared food for lunch, dinner and supper. For lunch, Njoy Planet Cafe of course has the best burger and shakes, but their chilli padi infused pasta aglio olio, buffalo squids and cheese baked rice are also quite a treat! At dinner best try their specialites like Grilled Cajun Chicken Thigh, Grilled Salmon and BBQ Beef Ribs, and they also serve a nice variety of finger food or entrees. Indulge in an unforgettable dinner together with their award winning cocktails.
Post a Comment
Continue Reading...
More posts