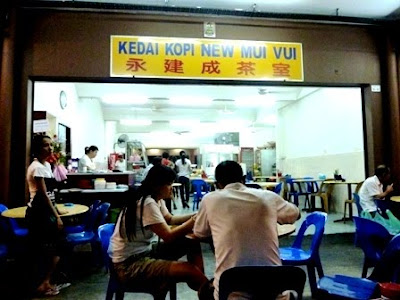 Well known for its great Wor Tip (dumpling), it is a must order if you happen to patronize the shop. Generous minced pork filling with thin layer of dumpling skin.

The Tuaran Mee served at Kedai Kopi New Mui Vui was as good as the original Tuaran Mee from Tuaran, Deliciously flavoured and perfectly stir-fried, the noodle was springy, fragrantly good and tasty.

Singapore Fried Meehoon wasn't originated from Singapore. It is just a cliche name given to catch attraction. It consist of meehoon stir-fried with bean sprouts, onion, egg and meat (chicken or pork), seasoned with curry spice, salt and sugar. It is a simple yet tasty dish.