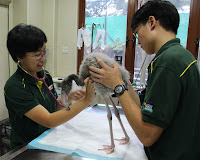 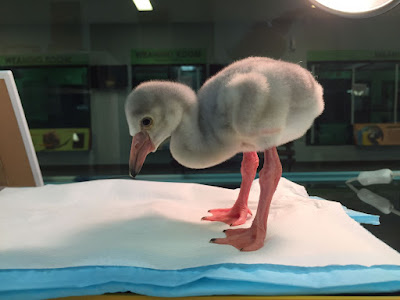 Image 1 (left): Squish standing on its own at Day Five. Greater Flamingos are the tallest in the flamingo family and can grow to a height of almost 1.5m.

Squish—affectionately named by his human carers for its ‘squish-ability’—is a Greater Flamingo, who was abandoned as an egg. When found by keepers, it was swiftly brought to the incubation room at the park’s Breeding and Research Centre, where it was kept snug and warm for about one month at around 37 degree Celsius, before hatching on 7 June.

Weighing just 90.5 grams at Day One, keepers took turns to keep a constant and close eye on the chick, feeding it a special formula consisting of eggs and multi-vitamins, up to five times a day. The formula is similar to a parent flamingo’s crop milk, which is high in protein. Today, Squish weighs a healthy 1.2kg.

To develop strength in its legs, Squish goes on short exercise walks around the Breeding and Research Centre daily. To protect its delicate foot pads from hard ground surfaces, his carers fashioned a pair of soft blue booties for Squish to plod around in, while having some fun in the sun. In their natural habitats where ground surfaces are softer, flamingo chicks start walking when they are about a week old. 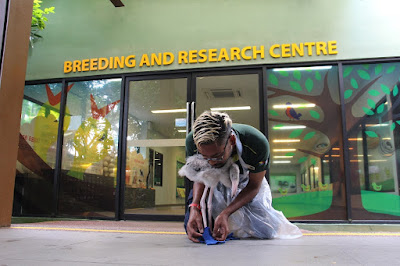 When Squish is not out and about walking, it spends time in the Centre’s weaning room getting used to the outdoor temperature and learning to feed on its own. When Squish reaches three months, it will be introduced to the flock at Flamingo Lake. 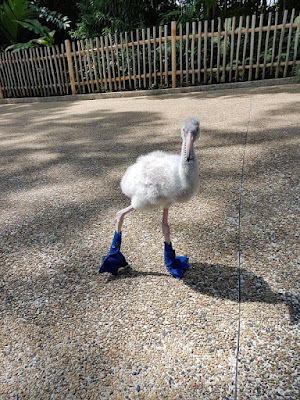 Image 3 (left): Keepers at Jurong Bird Park started walking Squish when he was ten days old. Currently two months old, Squish still enjoys its daily walks with his carers. These walks allow Squish some fun in the sun while developing strength in its legs.


Baby flamingos are whitish-grey, and gradually acquire their characteristic pink plumage after around two years from their diet of shrimps, other small crustaceans and algae. Greater flamingos are also the largest of their species. There are currently over 300 Greater Flamingos at Jurong Bird Park’s Flamingo Lake and every year the park breeds several chicks. 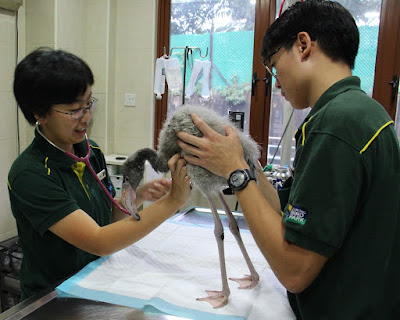 Jurong Bird Park also undertakes an annual health check and flu vaccination for waterfowl—such as flamingos—to ensure that the birds are healthy and facilitate early detection of illnesses and treatment.

Jurong Bird Park is located at 2 Jurong Hill Singapore 628925. More information can be found at
www.birdpark.com.sg

Everydayfoodilove.co/ angeline-ong-yoga.blogspot.com. Thank you for reading our posts. Our team media coverage touches mostly on lifestyle events and focuses on happening scenes in Kuala Lumpur and Kota Kinabalu. Invite us for food reviews, travel and hotel reviews, KL clubbing reviews and product launches. Our other interests include the movies, technology and photography. Subscribe to my facebook page. Contact us via my email at: [email protected] or [email protected]
Advertorial animal Bird Park Jurong Hill Research Centre Singapore