Hotel On The Park - A Familiar Place, A Friendly Makeover

Living my #BachelorLife in the busy lane of having to juggle my day-job as a Social Worker and as a Blogger, Dance-student, Photographer and Dungeonmaster in my spare moments have been quite taxing lately. I do not remember when was the last time I actually had a relaxing weekend! But an opportunity came when Resorts World Genting (RWG) generously invited Everyday Food I Love for a staycation. I jumped at the opportunity of course. 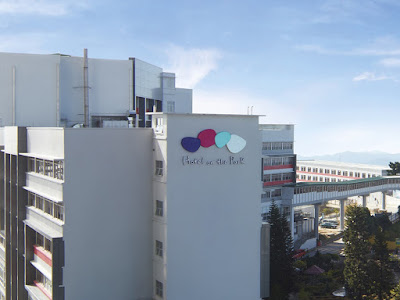 After a relaxing drive, I arrived at the famed City in the Clouds and was greeted by a marvelous sight; the newly completed Hotel On The Park.

Previously known as the Theme Park Hotel, it was the place I stayed at with my family when I first came to Genting Highlands as a wee lad. While I do not remember much from those hazy days of my youth, I do recall enjoying the deliciously cool clime, which was a far-cry from the warm summer days and nights of my native home of Sarawak. That, and the memory of eating a hamburger as big as my face! There are a whole lot more food options to be had in Resorts World Genting today, you can read all about the latest food venues in my latest blog postings here! 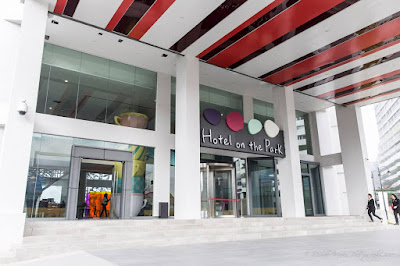 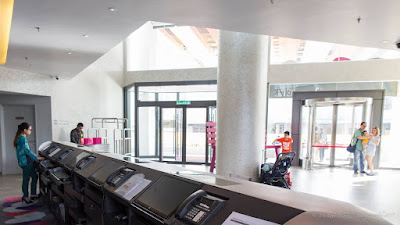 DID YOU KNOW? When it was built in the 70s, the hotel was called the Highlands Hotel. Later, it was re-named the Theme Park Hotel when they opened a theme park next to it. Following the closure of the theme park in 2013, the hotel was also closed and subsequently underwent major renovations. It is a testimony to it's structural integrity that it has stood the test of time for so long; its re-opening as Hotel On The Park in close proximity to the much anticipated Twentieth Century Fox World theme park promises to make future stays here a very memorable one.

Location: The hotel is set in within walking distance to the new SkyAvenue Mall, the SkyWay Cable Car, the SkyCasino, the Arena of Stars and the soon to be opened Twentieth Century Fox World theme park! While I've walked the entire breadth and length of Resorts World Genting, the fair accessibility of these places would be a crucial issue for holidaying families with a large entourage of children or elderly persons. 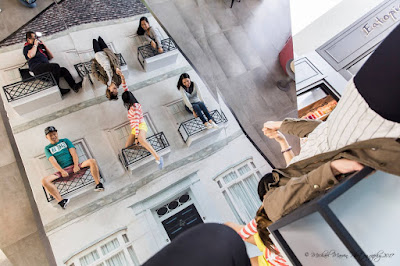 “It’s an old structure, based on a boxy, old school, industrial design. We wanted something exciting, new and different. We wanted the wow factor, so we decided to make a wish list of all the things a guest might want in a hotel room: armchair, armoire and TV etc. We went to design a surreal hotel which was stripped to the bare minimum to provide more bedspace, but one that would have all the expected things drawn in. All this was designed to make it a fun hotel, a precursor to the excitement which waits at the Twentieth Century Fox World. We designed according to the ‘line of sight’ theory. The goal is to have continuous, uninterrupted lines, straight lines to a clean ceiling which gives the impression of space.”

They done a complete renovation of the hotel, and the place is hardly recognizable from it's former old self. The 8,000 square feet lobby reception floors are ceramic tiled, with the rooms sporting vinyl flooring which are a godsend as it does not have the musky smell of the old budget hotels one are used to when travelling to places with high humidity. It is airy and well-lit both during night and day.

The hotel had an Alice in Wonderland feel. Once you walk into the lobby, you are greeted by the sight of a gigantic pillar of Giant Tea cups, stacked all the way up to the ceiling. A Giant Bench is parked nearby the reception area, it is for sitting while you wait. But most impressive of all was the Bank of Trick Mirrors. We had quite a lot of fun there taking pictures and imagining ourselves on a psychedelic adventure.

There was also a freestanding glass screen tinted with coloured gels which cast coloured hues of light. Public Restrooms are also fanciful, featuring a theme of green and white polka dots and patterned Easter eggs. It took a while to get used to, but all the directional signs at the hotel are printed with handscript, even the room numbers which are hand painted on the floor directly in front of the door. 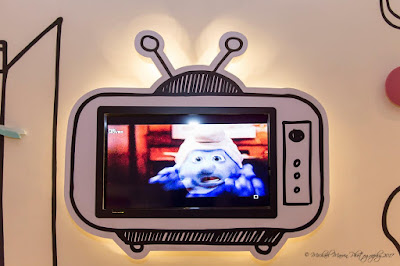 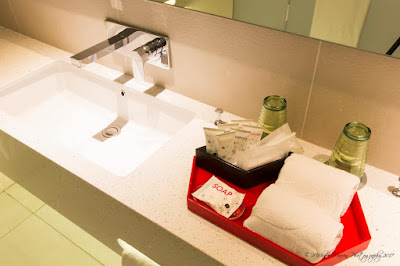 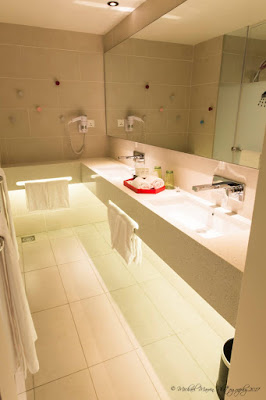 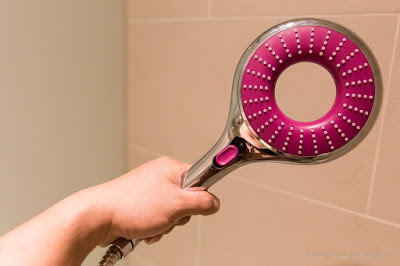 Hotel On The Park offers the standard amenities one would expect from hotels of repute such as towels, built in hair dryer in the bathroom, toiletries and hand towels in a tray next to the sink(s), and a giant plasma television disguised as a smartphone mounted on the wall. I don't watch TV, but I still managed to catch a Smurf on it anyway whilst channel surfing up the set for ambience. There is also the usual half-size refrigerator tucked away unobtrusively in a corner and yes, they have Wi-Fi and room service. They also have small bottles of water, a kettle for boiling water and tea and coffee sets by the built-in coffee table and desk. There are also ashtrays deposited in every room, only one-floor in the hotel is designated as a non-smoking area so please inquire and book accordingly.

DID YOU KNOW? Some people steal towels from hotels (yeah, I know, nothing new here)! The fun fact comes from knowing a few hotels actually offer amnesty for the return of stolen towels. I mean like, ewww, why? The American Hotel & Lodging Association estimates that more than USD$100 million worth of stuff are stolen annually from hotels in America alone. 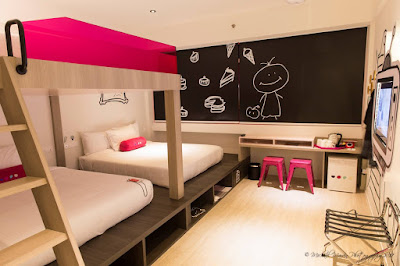 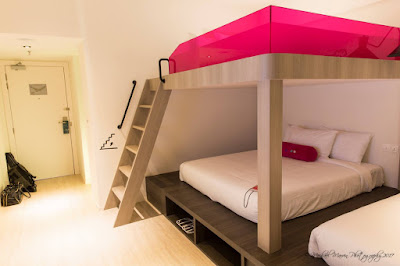 The hotel has 448 rooms! Back in the old days, the rooms could only fit two to three guests, or in my historical case, parents with 2 active kids. Realizing that vacationing families will need reasonably priced accommodations in the resort, Resorts World Genting doubled the capacity of these rooms simply by focusing on essentials. 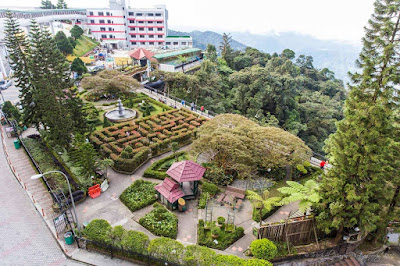 In a nutshell, their rooms are categorised into two types, the Sixer and the Quad room. Each can host up to six or four persons respectively. By removing all the unnecessary furniture cluttering up a room, RWG managed to clear up quite a lot of floor space. They then added Queen-sized beds parked on top of raised platforms, with a built-up bunk bed for the Sixer room hosting another Queen-sized bed. I liked the idea of the bunk bed, especially if you have kids who happen to like climbing everywhere, but mind your head.

There are compartments built into the raised platforms hosting the beds, which are used to store luggage, while room safes are also built into the drawer space. Clothes are hung on knobs around which artists have drawn outlines of closets. White Blackout Roller Blinds with hand-drawn art by the large windows complete the ensemble.

For those seeking exclusivity, there are four honeymoon suites in the Valley wing overlooking the Genting Valley and the English Garden. These suites are themed around the four stages of Romance, namely Courtship, Proposal, Wedding and Honeymoon. They are all stand-alone units but beyond that I can say no more as I am not qualified to stay there yet, thank you #BachelorLife. 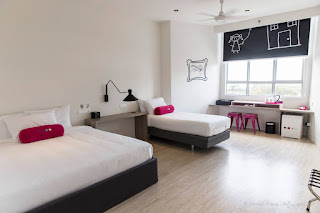 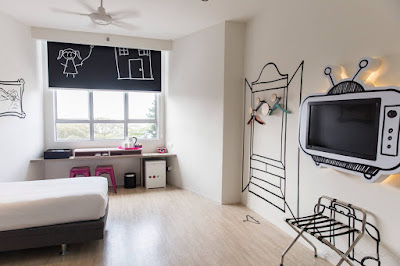 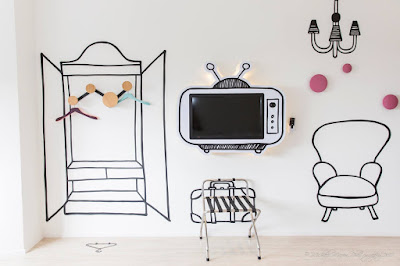 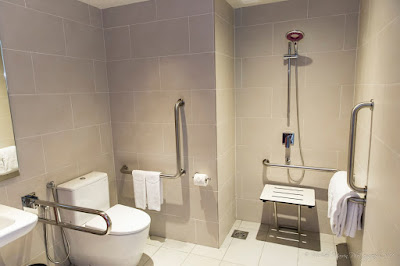 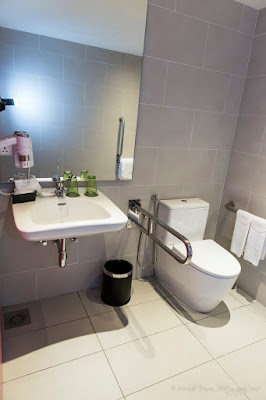 For those travelling with people with special needs, have no fear! Hotel On the Park has rooms to cater for this group. Called the King Special, these rooms are on the ground floor for easy accessibility which also sport elevating beds and specially bathrooms designed. There are only two of the units available however, so if you have need for this amenity, please inquire and book early to avoid disappointment.

Due to the naturally cool clime, rooms are not equipped with air-conditioning, which are essential for hotels in sunny Malaysia. Instead, powerful ceiling fans are mounted unto ceilings to help cool rooms if needed. 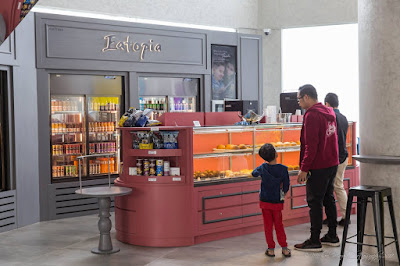 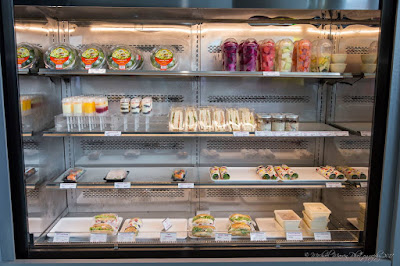 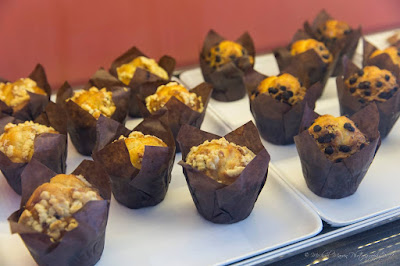 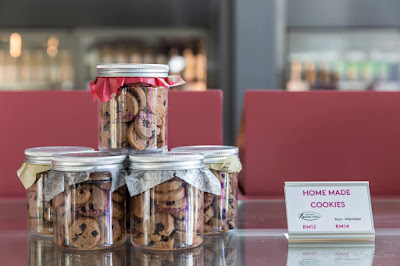 There are drink dispenser machines located in corridors near lifts, and an outlet called Eatopia in the hotel lobby. They offer an assortment of bakery items, heat-and-go wraps and pastas, Malaysian staples like Nasi Lemak; Sushi and hot and cold beverages. for the more health conscious ones, Eatopia also offers healthy breakfasts options like oats in a mug with a variety of accompaniments including peanut butter and banana, orchard bircher muesli and carrot and raisin.

But honestly, all the best foods are to be found in the nearby SkyAvenue. I came to this hotel just to crash, rest and change into cool duds. The rest of my waking time was spent enjoying cool air, walking up an appetite and eating and drinking at my new favourite, Palsaik Korean BBQ which I have been to twice so far! But that is another story ok, for a separate future blog post in the works.

Hotel Rate:
Hotel On The Park is now OPEN for business, and they are offering a special promotion for guests considering staying at the hotel, starting at RM200+ per night. These prices are expected to change with availability as they are based on a Tier rate. 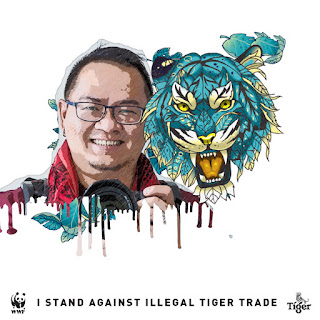 Everydayfoodilove.co/ angeline-ong-yoga.blgspot.com. Thank you for reading! We are currently expanding our reach in South East Asia to bring more for your next leisurely consideration. Our media team does media coverage for a wide variety of topics, ranging from Lifestyle events, HoReCa (Hotel, Restaurant and Cafe) reviews, Upcoming Clubs and Product launches. Our other interests also include but are not limited to dance, fitness, movies, technology and photography. Please subscribe to our facebook page. If you would like to get in touch with us, please contact us via email at [email protected], [email protected], or [email protected].
HoReCa Hotel On The Park Resorts World Genting Staycation