Mention Malaysia’s Favourite Mountain Resort and you will almost certainly be answered with Genting Highlands. Undisputedly acknowledged as a favourite holiday destination for those in the Klang Valley, it is just a short hour's’ drive from the city center and has been around for literally generations. The entire place is run and managed by Resorts World Genting and sports many wonderful attractions both old and new. There is in fact enough material to write about worthy of a guidebook, but in conjunction with the coming Chinese New Year, we are going to relate our experience visiting the Genting Palace, a chinese restaurant that serves Cantonese or Yuècài (粤菜) cuisine. 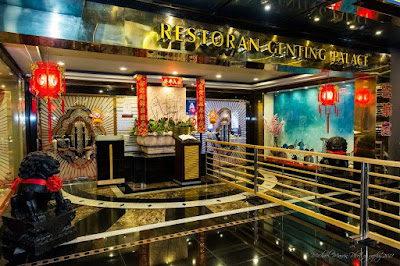 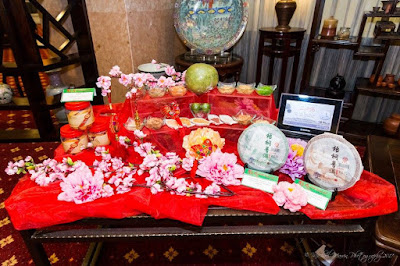 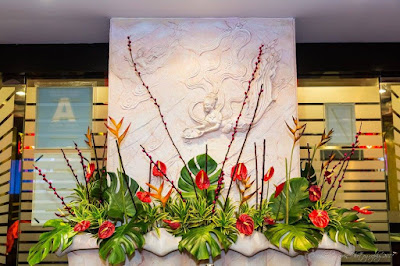 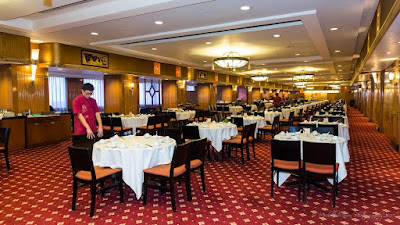 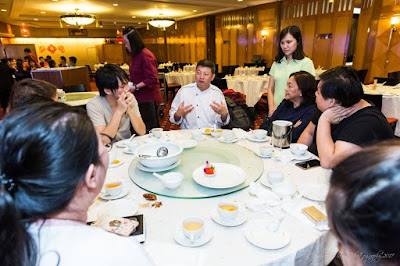 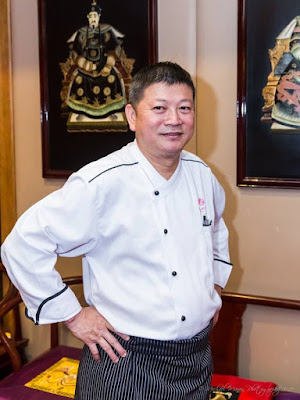 First-time visitors to Genting Palace Restaurant will be amazed by the main dining hall, which has a seating capacity of 700 persons! It also has 10 private dining rooms, and has a warm and relaxed atmosphere. They have quite a large selection of signature dishes to choose from their A’la Carte menu, but in conjunction with the coming Chinese New Year, Genting Palace is offering set courses ranging from RM568 nett for 4 persons per table to the elaborately lavish RM7,888 nett for 10 persons per table. And if you would like to know more, a breakdown was provided as the following for your perusal: 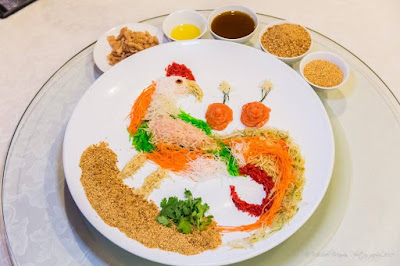 Prosperous Japanese Tuna Yee Sang
The Chinese equivalent of an Apéritif, this salad was fun to toss, and equally enjoyable to the palate. In your enthusiasm however, be careful not to toss it all over the place. 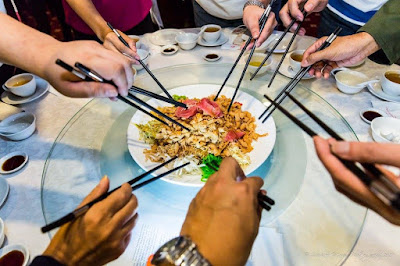 Reader’s Tip: Tossing Yee Sang is not difficult but requires mastery of the chopsticks. Hold up a generous portion as you can manage with your chopsticks and gently let it go directly above the plate. Most of it should land in the plate, do not worry if if falls over the side, Yee Sang is supposed to be messy! If you can manage to toss it from 12 inches high or more, you will have earned my respect. 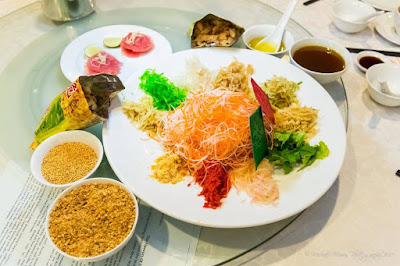 DID YOU KNOW? Yusheng, Yee Sang or Yuu Sahng (魚生) is a Teochew-styled dish that combines a great variety of ingredients into a cold salad. Also alternatively known as the Prosperity Toss, fish is traditionally used as the highlight of the dish used although with the opulence of the 21st century, it is not uncommon for enterprising chefs to substitute ingredients with whatever else that strikes their fancy in order to differentiate themselves from others. Whichever way you prefer it, it is commonly associated with abundance or prosperity, and is commonly eaten every Chinese New Year. The way it is eaten is simple. Gather everyone around the table and surround the platter of Yee Sang. At a signal, everybody sticks their chopsticks into it and toss the contents of the Yee Sang as high as possible, all the while exclaiming encouraging words and well-wishes for prosperity. Once everything looks properly mixed and messed up, it is ready for eating and everybody takes their portion. It is a fun activity and often a great way to break the ice at the dinner table. 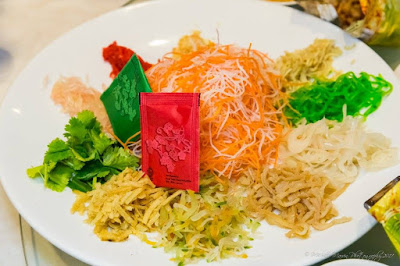 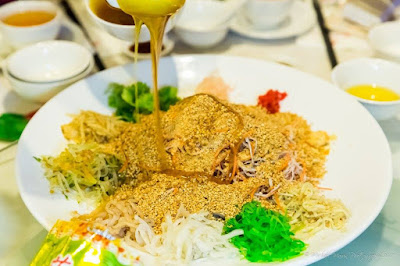 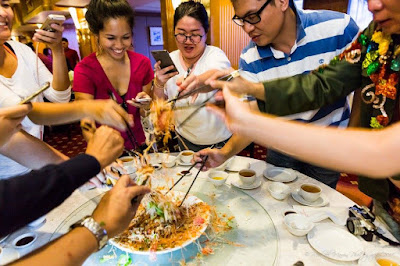 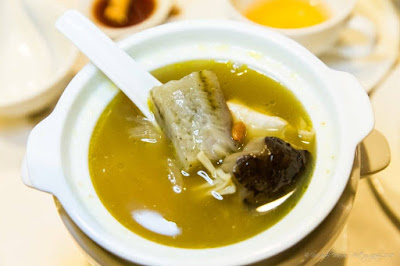 Double-boiled Dried Seafood and Abalone Treasure Pottage 👍
Not only was this soup rich in flavour, but Genting Palace served this soup with its own individual soup warmer, cunningly accomplished with the aid of a tea candle and ceramic holder. It can be quite cold for some at Genting Highlands, and you will be happy to know your soup will be kept warm as you slowly relish in it. 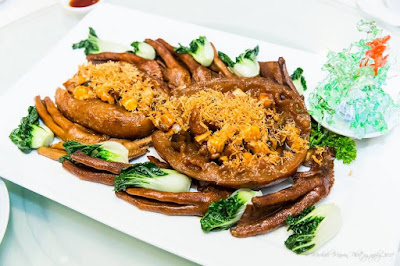 Steamed Sea Cucumber with Goose Feet 👍
The Sea Cucumbers were stuffed with a filling of diced roasted pork, water chestnuts and mushrooms, baby corn and carrots which were then garnished with strips of dried squids and a savory sauce. The jelly-like texture of the Sea Cucumbers contrasted greatly with the Goose Feet, which were rather chewy but nice. 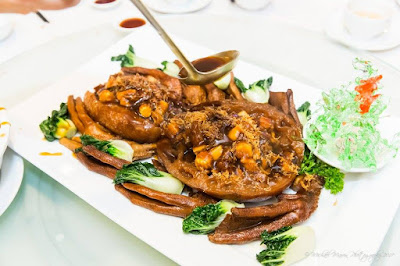 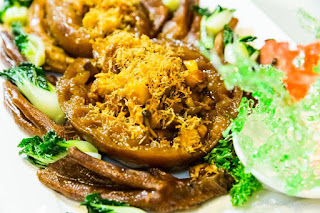 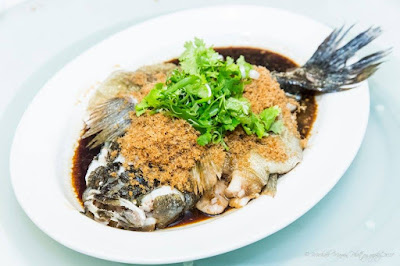 Steamed River Marble Goby with Crispy Ginger 👍
Local Chinese would know this fish better as the “Soon Hock”, and is rather popular steamed in a variety of ways. Perhaps someday I will write about the virtues of steaming fish, as I am part Teochew and we really love our fish. Not only was the delicate texture of the fish retained, but sweet succulence of it's flesh was enhanced by the savory sauce that accompanied it. The Crispy Ginger added spiciness, to me the contrast of flavours and texture was a delight. 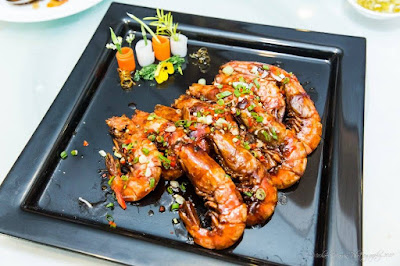 Pan-Fried Marmite Prawns 👍
Marmite is a heavy savory sauce often used with prawns. The already succulent prawns were meticulously cleaned so as my usual fashion, I ate it without shelling. It was an absolute moreish dish. 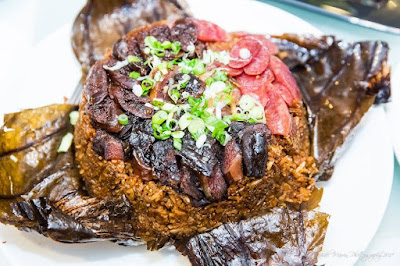 Golden Sweet Corn Fried Rice with Waxed Meat
In Cantonese or Yuècài cuisine, this dish is known as “Lap Mei Fan” or Waxed Meat Rice. This rice dish quite savory, and it came with a generous portion of waxed meat. 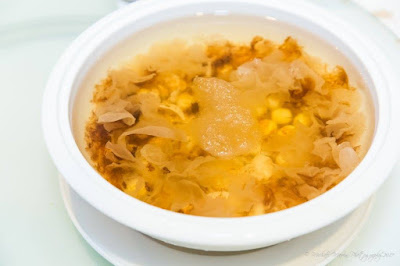 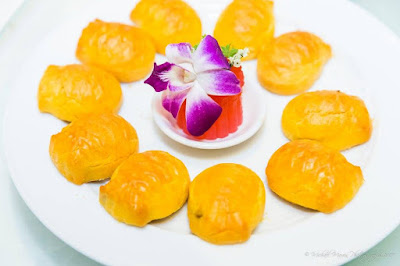 Genting Palace’s Head Chef takes the time to sit with us and talk about the Chinese New Year menu. 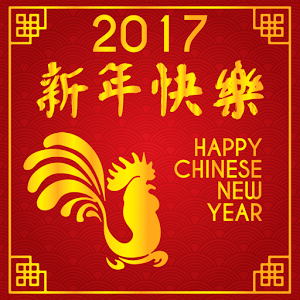 Keep in mind that the Chinese New Year set courses are only available from the 27th January to 12th February 2017 onwards for both Lunch and Dinner sessions. To avoid disappointments, why not make reservations and enjoy a relaxing holiday in Malaysia’s Coolest Resort? We at Everyday Food I Love take this opportunity to wish our readers a Very Happy and Prosperous Chinese New Year! Take care and have a safe hols everyone. ~ Marv.7

Everydayfoodilove.co/ angeline-ong-yoga.blogspot.com. Thank you for reading our posts. Our team media coverage touches mostly on lifestyle events and focuses on happening scenes in Kuala Lumpur and Kota Kinabalu. Invite us for food reviews, travel and hotel reviews, KL clubbing reviews and product launches. Our other interests include the movies, technology and photography. Subscribe to my facebook page. Contact us via my email at: [email protected] or [email protected]
Chinese New Year Genting Highland Hotel Yee Sang