The Eatery, located on the 13th floor is the hotel's signature all day dining restaurant, serving a wide array of local and international flavors on its breakfast and dinner buffet spreads. Overlooking the azure blue Sulu Sea, The Eatery boasts a modern contemporary interior reflecting the Four Points brand of being simple, honest and uncomplicated. Charming modern lighting, colorful dining setting with strategically located live cooking stations make up for a truly interactive dining experience.

The Eatery features a vibrant mix of local and international cuisine complemented with live cooking stations including grill, wok, noodle, pizzas and pasta plus a dessert bar. In addition, the venue also features exclusive booths for dinners seeking privacy with magnificent view of the harbor.

Operating daily from 6:30am to 10:30pm, the culinary must-have The Eatery include the venue's signature Hainanese Chicken Rice, Nasi Lemak (Malaysian's favorite rice dish cooked in coconut milk and pandan leaf0 and the freshly baked Pizzas.

Hinava, a type of raw fish salad, is a well-known ethnic food in Sabah. Marinaded with local lime juices, the fish tasted sourish but appetizingly good.

Another appetizing dish, Kerabu Mangga, literally translated as Mango Salad, is a dish made from fresh local mango with lime juice and chilli dressing.

A light and easy dish, the Wild Cucumber with shredded Chicken Soup was warm and comforting. It was savoury and slightly sweetish in taste.

Steamed Fillet of Fish Snapper with tumeric and young mango, serve with wok fried Sabah vegetables and local mountain wild rice. The perfectly steamed fish fillet has a smooth and delicious texture while mildly infused with tumeric flavour. Its light flavouring made the dish goes really well with the enjoyable mountain wild rice. Another must-try dish in Sabah is the local vegetables known as Sabah vegetables. Its sweet and juicy flavour made the vegetables tasted really delicious on its own.

To end a perfect meal, I had the local favourites dessert; Pais Pisang, Pais Jagung and Panjaram. Pais Pisang was made from unripened Banana, steamed in high temperature. It is slightly sourish in taste with soft and creamy texture.

Steamed Corn Cake known as Pais Jagung, is a sweet and nice dessert with a really soft texture.

Panjaram is made from a combination of wheat flour, rice flour and glutinous rice flour, sweetened with palm sugar. It has a nice chewy texture with light sweet flavour. 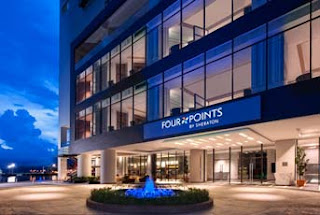 Everydayfoodilove.co/ angeline-ong-yoga.blogspot.com. Thank you for reading our posts. Our team media coverage touches mostly on lifestyle events and focuses on happening scenes in Kuala Lumpur and Kota Kinabalu. Invite us for food reviews, travel and hotel reviews, KL clubbing reviews and product launches. Our other interests include the movies, technology and photography. Subscribe to my facebook page. Contact us via my email at: [email protected] or [email protected]
Halal Hotel Invitation Sabah Sandakan Food Sheraton Travel