Core Yoga to strengthen your core and gluteus muscles for a good body alignment and healthy spine. Body alignment refers the positioning of your body segments such as to how the head, shoulders, spine, hips, knees and ankles relate and line up with each other. A proper static and dynamic alignment of the body puts less stress on the spine and helps you have good posture. Knowing how to move, sit and stand properly can help you stay active and prevent broken bones and disability. 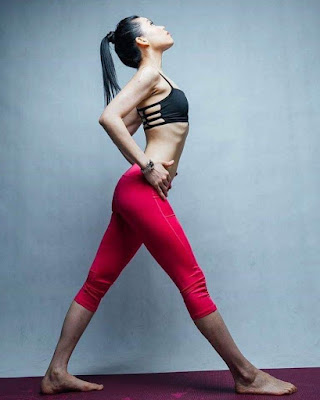 You need to keep your muscles active and engage the whole time to maintain an ideal standing alignment is a position in which the head, torso, pelvis are aligned above one another and above the feet 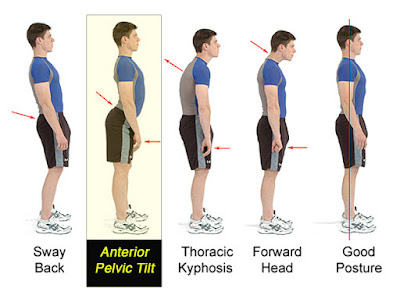 Check your body alignment from the side standing view
• Earlobe
• Head above shoulders, not jutting forward
• Scapulae neutral and shoulders open, not rolled forward
• Middle of the rib cage
• Spine with normal curve
• Pelvis neutral, not anteriorly or posteriorly tilted
• Projection on lateral femur
• The area just in front of the middle of the knee
• Knees straight but not locked or straightened so far they bow backward
• The area just in front of the ankle
• Feet neutral, not rolled in (pronated) or out (supinated) 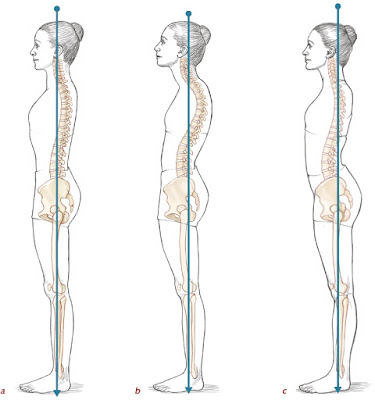 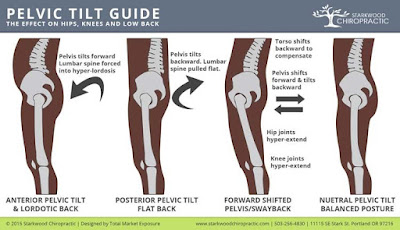 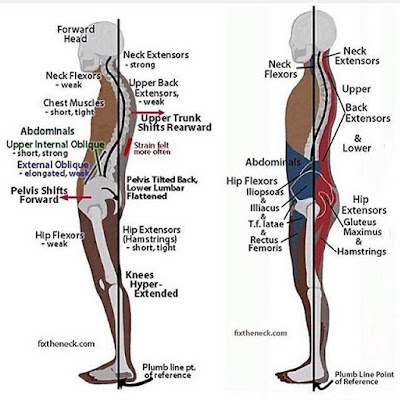 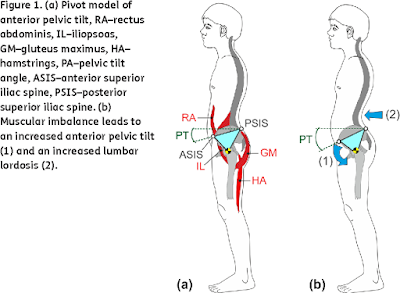 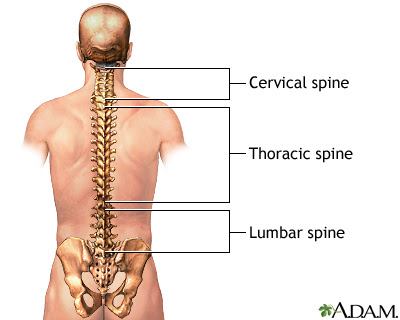 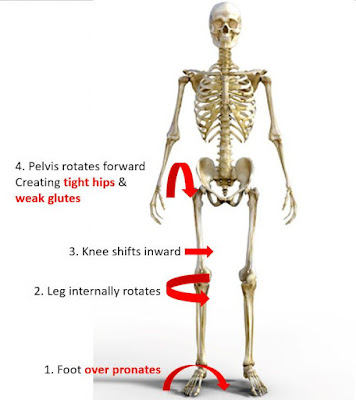 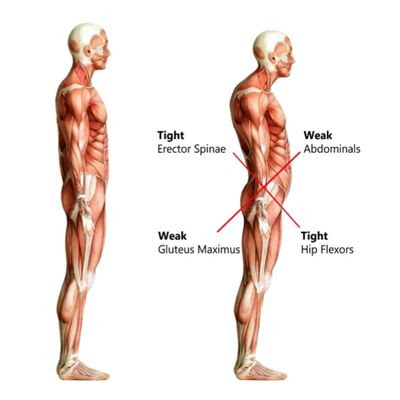 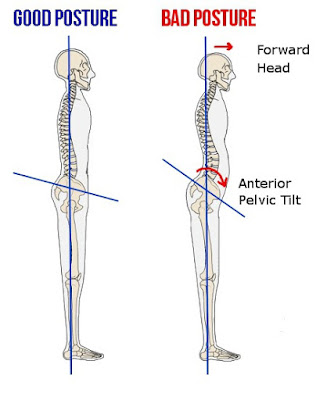 The appendicular skeleton consists of the bones that make up the limbs, or appendages. The appendicular skeleton has two subdivisions: the paired upper extremities and the paired lower extremities. 2 upper extremities - one clavicle (collarbone); one scapula (shoulder blade); one humerus (upper arm bone); one radius and one ulna (the forearm bones); and eight carpals, five metacarpals, and 14 phalanges (the bones of the hand). 2 lower extremities - one os coxae (hip bone); one femur (thigh bone); one tibia (shinbone) and one fibula (the smaller bone in the lower leg); and seven tarsals, five metatarsals, and 14 phalanges (the bones of the foot). Adult hip bone is made up of three fused bones: the ilium, ischium, and pubis. 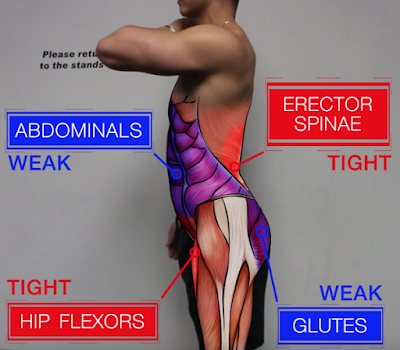 The spine provides the primary movement, stability, and body alignment. Spine movements utilized in Core Yoga - Spine flexion refers to a forward bending. Spine extension describes a straightening of the spine from a flexed position or movement backward in between straight. Spine lateral flexion - bending the spine sideways. Spine rotation - rotating the head or upper trunk one side 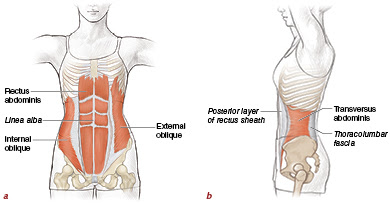 Abdominals and spinal extensors are the primary muscles of the spine; and the iliopsoas and quadratus lumborum also play a major role in certain circumstances.

The abdominals enhance movement technique, improve posture and reduce the risk of back injuries. The transverse abdominal muscle is generally the deepest abdominal muscle. Its fibers run in an approximately horizontal direction across the abdomen. Tranverse abdominal primary function is acting as corset to hold our postural, with its contraction results in pulling the abdominal wall inward and compressing the abdominal contents. Transversus abdominis play a major role in protecting the spine, automatically contracting to help stabilize the healthy spine and pelvis just before movements of the limbs. 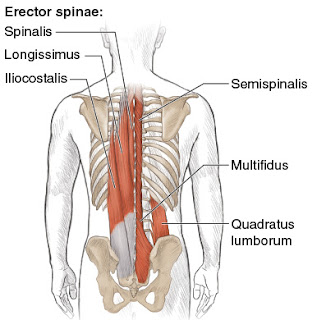 Spinal extensors are located on the back of the trunk, with the action of extending the spine, or back. These vital muscles for optimal movement performance, prevention of back injuries, osteoporosis, and correct postural problems and help you to get back into activity after recovering from back injury.

The deep posterior spinal group—interspinales, intertransversales, rotatores, and multifidus—is parallel in function to the transversus abdominis. Primary role of this muscle is to stabilization the spine and small movements of one vertebra relative to an adjacent vertebra. 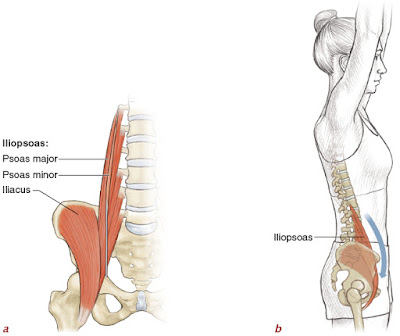 Quadratus Lumborum and Iliopsoas
The quadratus lumborum attaches from the pelvis to the sides of the lumbar spine and the lowest rib. When one side contracts, the quadratus lumborum can produce spinal lateral flexion to the same side.
The iliopsoas primary function is  hip flexion (to lift the leg high to the front).

Core Yoga requires a skilled activation of different spinal muscle groups at the same time with most of exercises that involve movement to change the body position relative to gravity.

The Core area begin from the bottom of the rib cage to a line across the hip joints in the front and to the base of the buttocks in the back. Core yoga movements are designed to strengthen the our core, if the core is being used correctly the limbs should be able to move in a coordinated manner.

Core activation or engagement play an important role for people who practice yoga, fitness, dance and also for rehabilitation. Core stability is an ability to keep the pelvis and spine in the right position while moving the limbs or the whole body through an undesired distortions or compensations. Someone who arches the lower back or moves the pelvis excessively is often describe to have a weak core or poor core stability.

Core yoga helps to achieve a neutral pelvic position by identifying an anterior pelvic tilt, and a posterior pelvic tilt. One of the benefits of the Core Yoga is to incorporates movement that use the multiple actions of these important core muscles. Pelvic muscles are used to prevent an undesired action and create core stability rather than actual visible movement. Many assisting muscles that attach to the pelvis are known more for their actions of moving the legs at the hip joint than moving the pelvis.

The gluteus maximus is also an important role for movements such as jumping, cycling, stair climbing, and uphill running. This muscle works as an extensor of the hip

Core Yoga work on emphasised by activating or squeezing the buttocks together, this will prevent us from losing tone in these muscles with aging. As we age, we often give up on activities that effectively challenge the gluteus maximus. Core Yoga techniques involve a continuous contraction of the gluteus muscles together with the use of other core muscles.

For example simultaneous contraction of the diaphragm and pelvic floor muscles will help maintain the abdominal contents and functionally work the transverse abdomens to enhance stability of the spine. Pelvic floor provide support for the terminal part of the rectum, the prostate, and the urethra in males and the rectum, the vagina, and the urethra in females. By strengthening the pelvic floor muscles it helps prevent us from urinary incontinence. 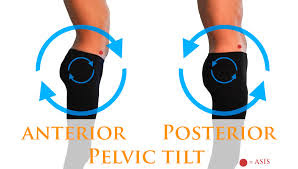 COMMON POSTURAL PROBLEMS AT THE HIP:
ANTERIOR PELVIC TILT
Anterior pelvic tilt is generally thought to be the result of a muscular imbalance. It will cause tightness or limited flexibility in the hip flexor muscles that cross the front of the pelvis and tight lower back muscles. Anterior pelvic tilt will leads to lower back pain, hip pain (because of the rotated femurs), knee pain (because of the locked knee position) and flat feet. Anterior tilt causes legs to rotate inward. 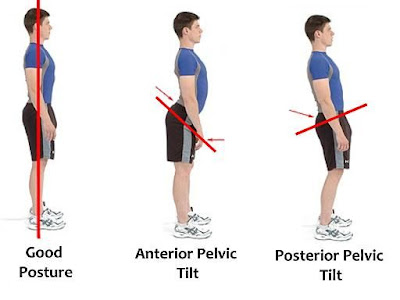 This muscle imbalance occur because many of us spend a lot of time in sitting (flexed) position, with a long duration sitting, the hip flexors are held in a shortened position and the glutes are less active than with standing or walking. 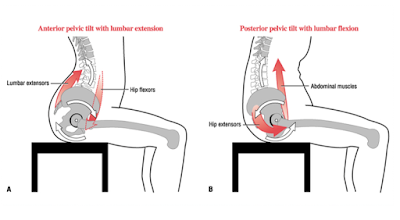 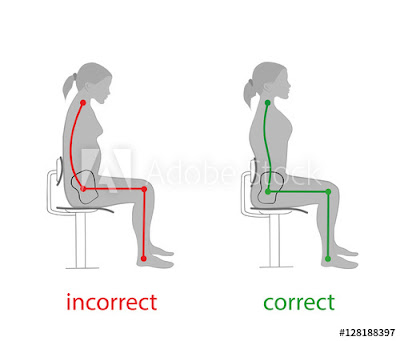 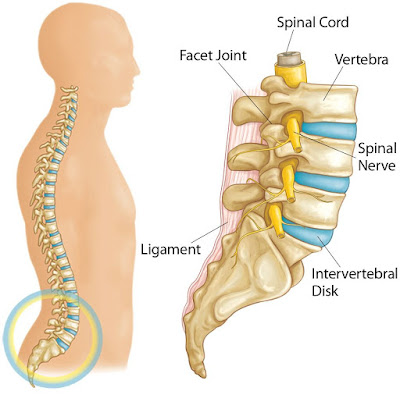 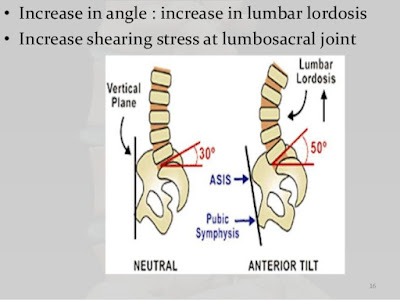 POSTERIOR PELVIC TILT
Posterior pelvic tilt is far less frequently than standard pelvic angle, it will affects alignment of the skeleton as well. The pelvis is turned under, flat lower back, without the lumbar curve, creating pressure transmit downward through the lumbar spine, cause a pinching pain feeling at the top and bottom of the lumbar spine. Also cause the disorientation of the hip sockets of the femoral heads. Often the lead head and neck of the femurs to swing horizontally backward, resulting in an external  rotation of the leg. Posterior tilt rotates legs outward. 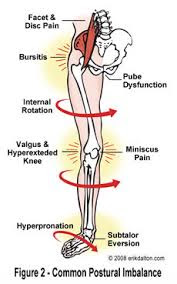 It will cause all kinds of knee problems, habits, surgeries, muscular or nerve dysfunction, predisposition (disease, genes, structural deformity). Obvious result in a bowing in or out of the knees If the legs bow in (valgus knee), the pelvis will rotate forward to compensate. Bowing out (varus knee) results in a backward rotation of the pelvis. 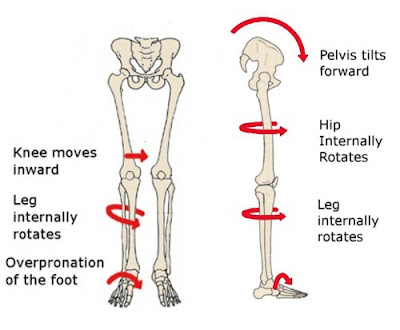 It will cause a poor core stabilization, so the joints compensate for the instability. A series of dysfunction takes place and crossed syndrome tilts the pelvis, freezes the hip joint, separates the pelvic bones from each other or jams them together 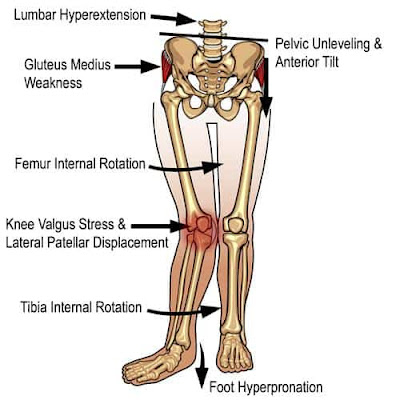