“BACK TO THE STREETS” 2ND SEASON OF AFC ORIGINAL PRODUCTION

On Tuesday, 10th September 2013 at 9.00PM, the Asian Food Channel (AFC) will premiere the second season of its fully produced Malaysian travelogue, Back to the Streets 2. The twelve-part series which includes a Chinese New Year special, returns in collaboration with BERJAYA University College of Hospitality and is sponsored by NeuVida Omega-9 Cooking Oil. The programme will air regionally across Asia to more than 130 million AFC viewers in twelve different territories; viewers in Malaysia can catch the AFC Original Production nationwide on Astro Channel 703. 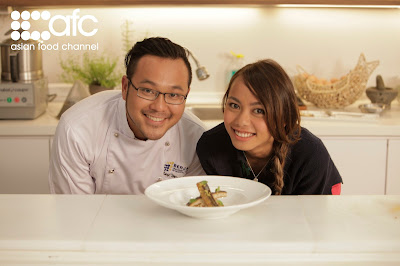 This season promises even more culinary adventure and quirky fun with its two loveable hosts taking centre stage. Chef Malcolm Goh and Tham Zher Peen extend the boundaries of their food journey as they take their search for tantalising Malaysian street food outside of Kuala Lumpur. Taking his role as “Secret Culinary Agent” all too seriously, Chef Malcolm becomes a man of a thousand faces, using a never-ending wardrobe of disguises to entice stall owners into giving him their cherished time-tested recipes.

Derek Chang, Managing Director of Scripps Networks expresses great pleasure with the premiere of yet another successful AFC original series, “Scripps Networks is very pleased with the loyal following that the Asian Food Channel has garnered in Malaysia since its launch in 2005. Through such originally produced local content, AFC can aptly showcase Malaysia as the food paradise that it is. We as a content provider look forward to discovering even more about Malaysia’s rich culinary heritage and sharing it with our regional viewers. I would like to give special thanks to BERJAYA UCH for collaborating with AFC on this project and look forward to working together more closely in the future.”

BERJAYA UCH Chief Operating Officer, Mae Ho adds, “We have been awaiting the premiere of Back to the Streets 2 on the Asian Food Channel with great anticipation. It has been a great pleasure filming with the AFC team and we are sure that the viewers will enjoy the second season even more than the first! BERJAYA UCH is very proud of Chef Malcolm, who is one of our own Culinary Arts Supervising Chefs – his innovative and forward-thinking attitude as displayed in the programme fully represents BERJAYA UCH’s own vision and the values that we look to instill in our students everyday.”

Chef Malcolm is no stranger to camera, before taking on the role of host and chef for Back to the Streets, he starred in another AFC Original Production named Great Dinners of the World. This programme featured him and three other highly talented Asian chefs as they travelled to France and Scotland where they cooked exclusive dinners for society’s elite and even royalty. When he is not in front of the camera, Chef Malcolm works as a Supervising Chef at BERJAYA UCH where he conducts theory and practical classes for students majoring in the Culinary Arts.

Zher Peen too has had her fair share of stardom; she is not only is the host of 8TV Quickie, a 15-minute variety show, she is also a celebrity DJ on Fly FM where she hosts Fly30, a 3 hour radio programme that airs daily. In addition, she has also been featured in campaigns for international brands such as Converse, Levi’s and Nike.

Back To The Streets 2 is proudly sponsored by BERJAYA University College of Hospitality and NeuVida Omega-9 Cooking Oil. Catch the premiere exclusively on the Asian Food Channel, Tuesday, 10th September 2013 at 9.00PM on Astro Channel 703. 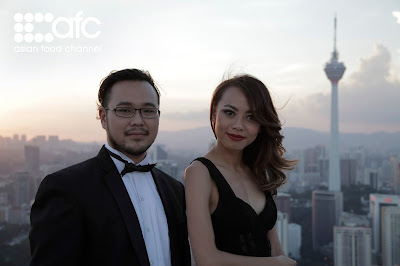 Annex A:
Back to the Street 2 - an AFC Original production
World Premiere: Tuesday 10 September 2013 at 9.00pm
JKT/TH 8.00pm
Secret Culinary Agent, Chef Malcolm Goh and his culinary sidekick, Malaysian radio DJ and host, Tham Zher Peen have partnered up again to do what they do best - to track down and replicate Malaysia’s outstanding street food at the one and only BERJAYA University College of Hospitality kitchen! This time, the dynamic duo go one step further, and extend their food search out of Kuala Lumpur! Join the ‘beauty and the geek’ as they travel the streets of Malaysia searching for pockets of hidden culinary gems. In a never-ending wardrobe of disguises, Chef Malcolm, a man of a thousand faces, will do anything to get his hands on the secret recipes and Zher reluctantly plays along! Once their mission is accomplished, Zher, Chef Malcolm and his trusty students stealthily retreat to the kitchen to reinterpret and recreate their own version of their favourite local dishes. Let’s go undercover and head “Back to the Streets”!
Annex B:
Chef Malcolm Goh Biography
Do not be fooled by Malaysian chef, Malcolm Goh’s mild-mannered demeanor in AFC Original Productions, Great Dinners Of the World and Back To The Streets. His infectious personality, outgoing nature and strong passion for food commands the kitchen. Whether he is cooking up a storm in France and Scotland, bringing his dinner guests the flavours of Asia or visiting local food stalls in the heart of Malaysia before returning to the kitchen to create newly inspired dishes, Chef Malcolm is a true foodie at heart.
Taking the culinary scene by storm in Kuala Lumpur, Malaysia, Chef Malcolm has won countless awards and competitions to date. In June 2004, he was a National finalist for Chaine Des Rotisseurs Best Commis of Malaysia and was the emerging champion out of eighty-six other young Chefs at Nestle’s 3rd Golden Chef Hat Awards. Other accolades include winning the silver medal for Apprentice Live Hot Cooking and Bronze Medal in Apprentice Set Menu (Cold Display) at Culinaire Malaysia 2005.
In 2007, Chef Malcolm was also awarded Apprentice of the Year from Cunlinarie Malaysia and received the Up and Coming Chef Award from the Chef Association of Malaysia.
He won his most recent award at the Hong Kong International Culinary Classic 2011, winning the silver medal representing Berjaya University.
Starting his training in 2003 at the Sheraton Imperial Kuala Lumpur, he worked for four months in various areas at the hotel such as the butchery, the coffee house and the fine dining restaurant, Villa Danielli.
In 2004, he was appointed as Commis III at the Rossini fine dining restaurant at Ritz-Carlton Kuala Lumpur, where he presented a contemporary Mediterranean Cuisine and contributed to the creation of their degustation menu. Then he worked at Le Meridien Kuala Lumpur as Commis II and was quickly promoted to Commis I within the year. Recognised for his culinary talent, he was also personally hand-picked by the Executive Chef to join the pre-opening team of PRIME restaurant at Kuala Lumpur’s latest international steak restaurant.
In 2009, Chef Malcolm then moved into teaching, working as Supervising Chef at Berjaya University where he conducted theory and practical classes for Diploma to Culinary Art students. He then moved to KDU College to become a Culinary Instructor.
In 2011, he returned back to Berjaya University where he currently holds the position of Culinary Executive/Supervising Chef, teaching practical and theory classes as well as working as a Competitions Trainer.
Annex C:
Tham Zher Peen Biography
With a bubbly and upbeat personality, one name not to be missed is Tham Zher Peen, co-host of AFC’s latest Original Production, Back to the Streets. In this exciting new series, Zher Peen joins Chef Malcolm Goh to comb the streets of Kuala Lumpur in search of local culinary delights. A graduate of Griffith University, she has a long line of achievements under her belt. Her entry into television came about by chance when 8TV producers spotted her when she was working behind-the-scenes at their production studio.
Currently Tham Zher Peen is the host of 8TV Quickie, a 15-minute variety show, and also a celebrity DJ at Fly FM where she hosts Fly30, a 3 hour radio programme that airs daily.
As if her growing TV and Radio career aren’t enough, Zher Peen is also a part of the campaigns for international brands such as Converse, Levi’s and Nike. She has also hosted several press conferences and launches such as Gucci Timepieces Launch and Asia Film Week Press Conference.
Recently, Zher Peen has been chosen as the ambassador of Japanese heritage lifestyle brand, Onitsuka Tiger, as she was the perfect choice to carry the brand with her cheerful presence and fashion sense. There is no doubt that Zher Peen is all set to take the entertainment scene by storm with her fun and addictive nature! 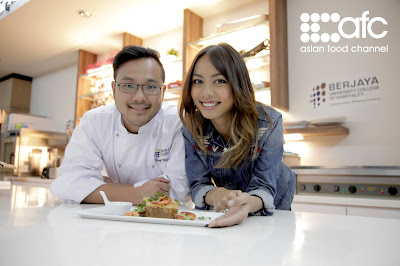 About NeuVida Omega-9 Cooking Oil
NeuVida Omega-9 Cooking Oil is produced from NEXERA™ SEEDS; a super grade sunflower variety which is a breakthrough in modern agricultural science. Developed by Dow AgroSciences USA, it is bred using conventional plant breeding techniques; and not genetically modified. Oil produced from the NEXERA™ sunflower seed is extremely rich in Omega-9, even higher than that of olive oil. NeuVida has zero trans fat and the lowest saturated fat (bad fat) content amongst all cooking oils. It is heat-stable even under intense temperatures of 250°C! Most oils would have oxidized and polymerized at a much lower temperature. This makes NeuVida an ideal healthy oil for every style of cooking; from salads to baking and deep-frying! For more information, please visit http://www.neuvida.com.my/.

Everydayfoodilove.co/ angeline-ong-yoga.blogspot.com. Thank you for reading our posts. Our team media coverage touches mostly on lifestyle events and focuses on happening scenes in Kuala Lumpur and Kota Kinabalu. Invite us for food reviews, travel and hotel reviews, KL clubbing reviews and product launches. Our other interests include the movies, technology and photography. Subscribe to my facebook page. Contact us via my email at: angel_line78@hotmail.com or monicaong@hotmail.com
Advertorial AFC Kuala Lumpur