When it was announced that the 11-time UK Supermoto Champion, Chris Hodgson, will again race in Malaysia, fans looked forward to a master class display of supermoto riding skills. Then when Hodgson’s compatriot, Lewis Cornish confirmed his participation as well, fans knew sparks were going to fly. 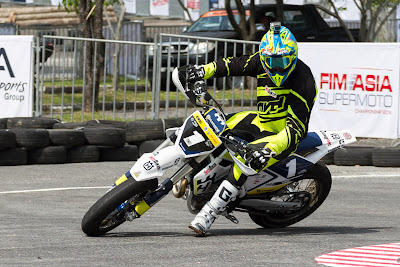 The track hewn from the grounds next to the imposing Stadium Shah Alam covers a large area and consists of two long straights, so much so the course marshals set up multiple chicanes in order to keep top speeds down. That had also in effect made the track more balanced to keep some of the more powerful bikes from walking away from the rest of the field, and in essence, turning proceedings over to rider skill and bike setup. 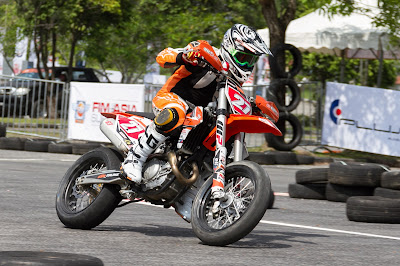 The weather had stayed blazing hot up to mid-afternoon when the heavens opened up for a brief shower. Fortunately, the hot tarmac dried quickly and the dirt section stayed open.

Hodgson had been fast from the get-go as he adapted to the track quickly, “ASG plus the FIM Asia organized a great event. I found the track suited my riding immediately.” He had posted the fastest time of 54.310s in the first Free Practice, then knocked off 0.5s to record 53.833s in the second Free Practice session, pared off another 0.8s to record 52.998s in Qualifying before ultimately dropping under the 52s mark by turning in a blistering 51.163s. 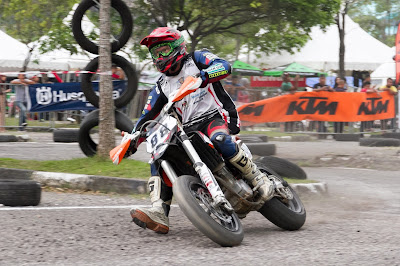 Lewis Cornish had been riding limited number of laps throughout every session. Long-time obeserbers noticed that he had been riding conservatively compared to his usual hard-charging, no-holds barred style. He could have ended in Pole Position but it didn’t transpire. “We’ve had a few problems today that we’ll need to sort out. The bike is going to Kenny’s (the team owner) workshop tonight to work on the front brake. We’re very hopeful for tomorrow,” said a positive Cornish.

Richard Dibben came back from a heartbreaking DNS (Did Not Start) in Round 3 to claim the third fastest time, but not without some drama. He crashed in Qualifying and Super Chrono, but suffered no motorcycle and physical damage, thankfully. He posted 53.498s in Qualifying then rode steadily during Super Chrono, settling on conservative 53.628s. 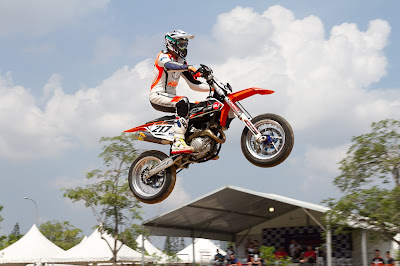 In fourth after Super Chrono was Andy McLiesh, the overall winner of Round 3 in the Philippines. Fast as he was, he didn’t seem to be fully comfortable. He had been fifth after Qualifying, recording a time of 54.029s, before pushing to post his fastest lap of 53.833s in Super Chrono. “It’s been a tough day. Lots of chicanes and we’re not used to the tight stuff, but we made up some time in Super Chrono. But raceday would be different with many variables that could come into play. We look forward to a good start tomorrow and go from there,” said McLiesh. 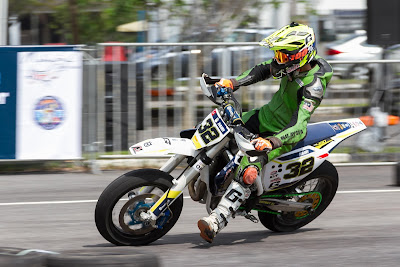 Open International and Asian classes points leader Muhd. Habibullah Saleh, better known as Gabit, needs to cross the finish line in third in both Motos in order to seal the championship in tomorrow’s race. Circulating as fast as he could, he only found himself fifth fastest, stopping the stopwatch at 54.147s in Super Chrono. He had recorded his fastest lap of 54.131s in Qualifying. “I’ve rode as fast as I could but couldn’t go any faster,” said Gabit. “I’ll have to see what we can do tomorrow to secure the championship. Riding too hard isn’t part of the game plan but we’ll play be ear. I’m not feeling any pressure ahead of tomorrow.” 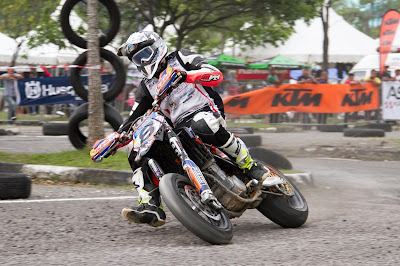 Khairi Zakaria had also been pushing hard through the weekend but had to start in sixth. He had actually qualified as high as fourth in the earlier Qualifying session with his best time of 53.944s, then mysteriously dropping almost two seconds to finish Super Chrono in sixth, with a fastest time of 55.233s. “My left boot’s slider got partly sheared off and kept getting caught on the footpeg. I had so much trouble moving the foot and shifting gears. There wasn’t enough time to stop and fix it, so I lost time,” said a visibly dejected Khairi.