The fourth and final round heard the roar of Malaysians as Muhd Habibullah (#27 Gabit) takes the FIM Asia Supermoto Championship 2016 for both Open International and Asian Class. He is the first and only person to win at both classes against 21 top international riders from 18 countries. The Asian Class podium was followed by Khairi Zakaria (Hairi) and Mohd Al-Amirul Ashshahid (Gaban) who took the first and second runner-up respectively. A grand gala dinner was arranged after the race in celebration of the successful campaign.

Upon completion of four heated rounds in four countries across two regions namely Australia in September, Indonesia in October, the Philippines in November and Malaysia in December, Gabit said that the race played a significant role in elevating the industry’s standard. “Before the race was founded, it was tough to look for an avenue to compete internationally and expand our skills. While the local races and other small scaled regional races played a role in pushing the boundaries, competing on a global scale will open our eyes to skills, rivals and competition we have not encountered.” 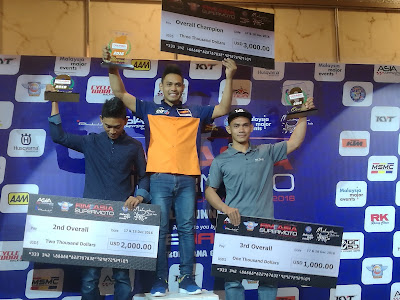 Champion, Muhd Habibullah (Gabit); first runner-up, Khairi Zakaria; and second runner-up Mohd Al-Amirul Ashshahid (Gaban)
“Riders from Asia has proven to be as competitive as other international riders. We believe that this championship will be the footstep for us to improve our skills and spearhead the Supermoto scene,” he added. Gabit concluded his winning speech with a chant of ‘Malaysia Boleh’.

Gabit completed the race with a best lap time of 53.496 against qualifying leader Richard Dibeen in a neck to neck battle for the title in the final race, with near to collision incidences happened at the final turn of the track. While it was disappointing for Gabit’s brother, Gaban, who ended his brawl earlier than expected due to machine malfunction at Race 2, Gabit surfed through the track with confidence, sweeping both titles at home ground. Gabit scored a total of 171 points standing at the Open International Class, followed by Australia’s Andrew McLiesh with 138 points, Malaysia’s Mohammad Khairi bin Zakaria with 123 points, Malaysia’s Mohd Al-Amirul Ashshahid (Gaban) with 112 points, New Zealand’s Richard Dibben with 108 points and Japan’s Takashi Sasaki with 87 points. 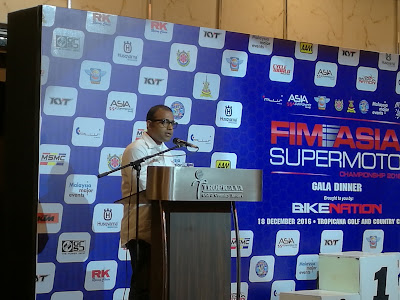 Satheswaran Mayachandran, CEO of ASG, delivering a speech at the grand gala dinner.

Satheswaran Mayachandran, CEO of Asia Supersports Group, a consortium of three companies namely Bikenation Motorsports Sdn Bhd, CW Media Sdn Bhd and E-Plus Entertainment Productions (M) Sdn Bhd, indicates that the race will continue to grow in the future. “Supermoto is an inclusive type of motorsport due to its versatility. Within a short duration, the championship has gained world recognition for its effort to promote the motorsport. Fans can expect a bigger race with more excitement in 2017. Finally, I would also like to congratulate all the riders and express my deepest gratitude to every host country, local promoters, sponsors, partners and the members of the media for their unwavering support and contribution.”

Datuk Zulkefli Hj Sharif, CEO of Malaysia Convention ND Exhibition Bureau (MyCEB), is pleased with the outcome of the championship. “The race has concluded with resounding success, and we have witnessed its looming potential in driving the economy of its host countries, especially Malaysia. This proves that the FIM Asia Supermoto Championship will be the next internationally recognised motorsport race, providing outcome on par with other well-established Grand Prix around the world.”

Everydayfoodilove.co/ angeline-ong-yoga.blogspot.com. Thank you for reading our posts. Our team media coverage touches mostly on lifestyle events and focuses on happening scenes in Kuala Lumpur and Kota Kinabalu. Invite us for food reviews, travel and hotel reviews, KL clubbing reviews and product launches. Our other interests include the movies, technology and photography. Subscribe to my facebook page. Contact us via my email at: [email protected] or [email protected]
Advertorial FIM ASIA SUPERMOTO CHAMPIONSHIP 2016