Years before the war in Melaka, in Jalan Tokong, six shop-houses stood where different families resided. Sometimes before 1939, these six families left and the different shop-houses were renovated and transformed into a new home for a single family. Fast forward to now, in the 21st century, the prewar structure is given a new life and is called Liu Men Melaka. A 30 rooms charming boutique hotel situated in a heavily adorned street appears to be conjured from Asian romance novel. 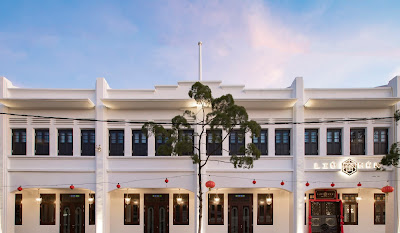 Liu Men or ​‘six doors’ holds special meaning. Six or (六, LIÙ), is an auspicious number and is believed to be the inspiration behind the name. Liu Men Melaka is a perfect harmony of East and West, a celebration of 1930s colonial art deco influences and added with distinctive Eastern twist of vibrant reds symbolizing joy or luck in playful chaos. It is what is identified within Peranakan culture.

Peranakan culture is breathed in Melaka, one of Malaysia’s oldest cities. A soothing and comfort escape from big cities, it hides underneath a foundation of vibrant and eclectic multiculturalism that dates back hundred of years. With Melaka’s flourishing economy under the British colonial rule as a port city, the blooming economy paved the way for the rise of communities in the late 1930s. 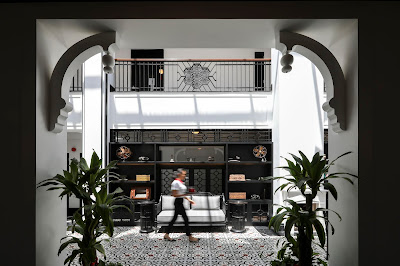 Communities that are steeped in different cultures such as Kristangs settling in Portuguese settlement where fishing has always been their way of life. The Indian community, descendants of spice and textile traders where we can still explore the fabric stores along Jalan Bendahara and the exotic taste of authentic south Indian cuisine with local Malay spices. The Chinese migrants, who came as traders and craftsman then settling in Jonker, Melaka. The Chinese Peranakan Baba and Nyonya shop fronts assimilating colonial style with Chinese and Malay culture seen in the white colonial pillars and dark wood, perfectly combined with vibrant reds.

Liu Men Melaka is a label of ​Préférence Hotels by TAUZIA. Préférence Hotels offers a unique selection of hotels with distinctive surroundings. Each one represents distinct ambiance along with the charming local history. Liu Men Melaka becomes a shining addition showcasing the unique, authenticity and allure of Melaka to the world.

“We are thrilled to welcome each guest through the eminence six doors with open arms as a family member would be,” said Dadang Setiawan, General Manager Liu Men Melaka, ”There is no stranger in Liu Men Melaka, everyone is part of extended family treated with honor, warmth and thoughtful service.” 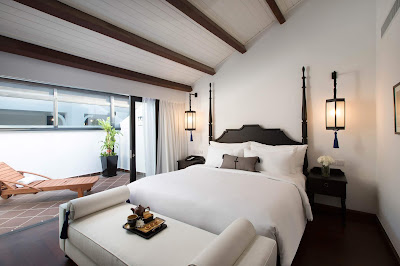 “Our hotel is also a gate to the Peranakan culture, to guests who are looking to immerse themselves in a world of colors, art and culture in personable atmosphere,” he concluded.

About TAUZIA Hotels :
Established in 2001, TAUZIA Hotels is a portfolio of 123 hotels in operation and development under the brands of Préférence – a label for a collection of charming and discreet boutique hotels, HARRIS Vertu – upscale hotels bearing the concept ‘Joy of Life’, HARRIS – upper midscale hotels promoting healthy lifestyle and guests can ‘Stay Bright’, FOX Harris - midscale hotels with contemporary and adaptable design, YELLO – midscale hotels for aspiring travellers who appreciate creative design and technology, and POP! – economy hotels for smart and eco-friendly travelers. TAUZIA aspires to build a blend of culture in its management style and product development while promoting diversity in the hospitality industry. TAUZIA was recently recognized with Indonesia Most Innovative Business Award 2018 by Warta Ekonomi. Visit tauziahotels.com​ or @tauziahotels for more information.

TAUZIA is a member of The Ascott Limited (Ascott), a Singapore company that has grown to become one of the leading international lodging owner-operators. Spanning more than 170 cities across over 30 countries, Ascott’s other brands include Ascott, Citadines, Somerset, Quest, The Crest Collection and lyf. Ascott is a wholly owned subsidiary of CapitaLand Limited (CapitaLand), one of Asia’s largest real estate companies headquartered and listed in Singapore. Ascott boasts over 30 years of industry track record and award-winning brands that enjoy recognition worldwide. For more information on CapitaLand and Ascott, please visit ​www.capitaland.com and ​www.the-ascott.com​.

Everydayfoodilove.co/ angeline-ong-yoga.blogspot.com. Thank you for reading our posts. Our team media coverage touches mostly on lifestyle events and focuses on happening scenes in Kuala Lumpur and Kota Kinabalu. Invite us for food reviews, travel and hotel reviews, KL clubbing reviews and product launches. Our other interests include the movies, technology and photography. Subscribe to my facebook page. Contact us via my email at: [email protected] or [email protected]
Accommodation Advertorial Boutique Hotel Melaka Travel