6 Most Instagrammable Exhibits to Check Out at Vivid Sydney 2019

The news is out and in the eleventh year of VIVID SYDNEY we are seeing some gorgeous exhibits on display. The largest festival of light, music and ideas in the Southern Hemisphere will ignite the Harbour City this winter from Friday 24 May to Saturday 15 June 2019.


Nothing quite speaks to the ‘gram more than a stunning firefly field or the dreamiest looking clouds floating overhead. If you’re looking for the most picture-worthy exhibits or light installations to check out… Look no further.

A list of the 6 most Instagrammable exhibits to check out at Vivid Sydney this year.

NOSTALGIA ABOVE
Like a kid in a candy shop, you’ll feel like you’ve floated right back into your childhood days with Nostalgia Above. As a kid we all loved to gaze up at the clouds in the sky, take a moment, and then drift into reverie. Nostalgia Above encapsulates that very calming feeling by connecting the romance of nature with data-driven climate technology. A virtual barometer that forecasts rain and thunderstorms, clear or gloomy skies, the clouds gently shift and change colours as you walk beneath it – just like the passing of natural clouds.

PIXAR ANIMATION STUDIOS ILLUMINATING ARGYLE CUT IN THE ROCKS
Find yourself transported through a visual feast of behind-the-scenes artwork and the evolution of iconic animation with Academy-Award winning Pixar Animation Studios, illuminating Sydney’s heritage-listed Argyle Cut in The Rocks. The creative light projection will feature favourite characters of Pixar films, including the beloved duo of Woody and Buzz Lightyear – marking the release of Toy Story 4 come June 2019. Packed with heart, humour, believable worlds and heart-warming stories, it’ll sure bring a fuzzy moment to remember on your IG feed where you’ll have your followers going ‘Awww’.

FIREFLY FIELD
If you’re a fan of bokeh and fairy lights, you’ll love this one. Over at the Royal Botanic Garden Sydney, get lost in the mesmerising Firefly Field – where 500 flying light points simulate an aerial ballet of these tiny nocturnal winged creatures. Linger a while longer to capture a long exposure shot or even a time lapse. 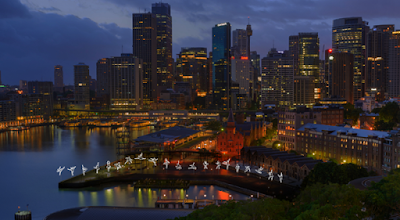 BALLERINA
An eternal dance solo titled Ballerina is brought together by the returning Campbells Cove, shimmering along the harbour’s edge and mimicking a dream. You’ll have a great time emulating the grace of these dancers as they light up the harbour simultaneously and then all at once. 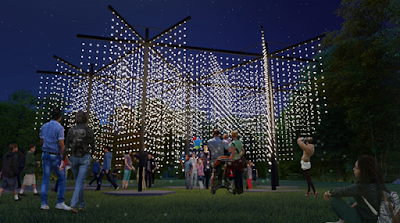 LET IT SNOW
You’ll never expect to see snow right in the middle of the city of Sydney but for the first time you just might get a glimpse of it. This immersive installation mirrors the landing of giant snowflakes along Hickson Road Reserve. Walk between the crystalline structures to get a sense of the way snow flurries. Let It Snow responds to weather patterns and pedestrian motion – so you’ll not only get a stunner shot for your Instagram, you’ll also enjoy weaving your way through it. 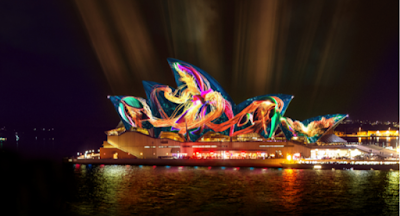 AUSTRAL FLORA BALLET
Of course, one can’t leave out the iconic Sydney Opera House – transformed this winter into a hypnotic tribute to Australia’s native plants titled the Austral Flora Ballet by Los Angeles-based Chinese American artist-filmmaker Andrew Thomas Huang. This glittering spectacle is crafted from beloved floral gems such as the New South Wales waratah, kangaroo paws and red beard orchids, incorporated with a dancer’s movements in response to the sensuous arcs of the Sydney Opera House’s silhouette. That’s beauty in a square right there.

Catch all these spectacular installations as they light up the Harbour City at VIVID SYDNEY this winter, from Friday 24 May to Saturday 15 June 2019.

Everydayfoodilove.co/ angeline-ong-yoga.blogspot.com. Thank you for reading our posts. Our team media coverage touches mostly on lifestyle events and focuses on happening scenes in Kuala Lumpur and Kota Kinabalu. Invite us for food reviews, travel and hotel reviews, KL clubbing reviews and product launches. Our other interests include the movies, technology and photography. Subscribe to my facebook page. Contact us via my email at: [email protected] or [email protected]
Advertorial attractions Australia Instagram worthy Sydney Travel