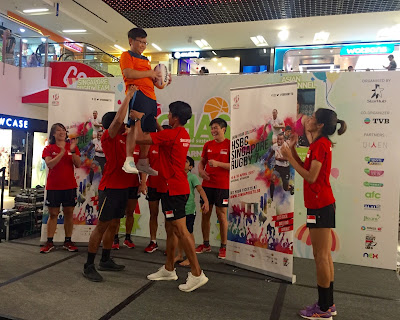 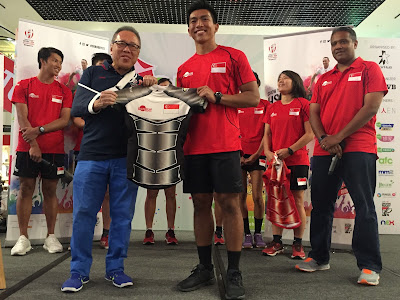 Samurai spirit for Singapore national teams
Additional firepower and inspiration has arrived in the form of a new national team apparel sponsor, Samurai Sportswear. Samurai is a popular UK sportswear brand and its name is derived from the Samurai 7's team, regarded by many as the world's most successful invitational Rugby Sevens team. The team name was inspired by 'Samurai spirit' and the free-flowing rugby and immense belief shown by the Japanese team at the 1995 Rugby World Cup in South Africa.

“This is a two year deal and will be the first time the national jersey will be worn on home soil,” explained Singapore Rugby Union General Manager George Danapal. "Singapore Rugby Union (SRU) is constantly trying to improve the professional image of our players and our organization. We are pleased to work with Samurai, a world-renowned brand, on this agreement. Samurai has a long history in supplying quality rugby apparel globally and we look forward to kitting all our national squads in Samurai gears.”

Southeast Asia’s rivals set to tackle SEA Games warm-up event. Held at the Yio Chu Kang Stadium on 14 April from 9am to 730pm, the SEA 7s will feature eight men teams and 6 women teams playing in a group league followed by a knockout format. The SEA 7s men and women’s finals will be played at the Singapore National Stadium on 15 April during day one of the HSBC Singapore rugby 7s.

“We need to be more consistent against our SEA Games rivals,” said men’s national captain Marah Ishraf who took over the captaincy from long-time stalwart Daniel Marc Chow late last year. “For example in last year’s Asia Rugby 7s series, we beat Malaysia once but they beat us twice by narrow margins. This year, we have had an overhaul in terms of our coaching team and players. We have a lot of young talent coming through the ranks who are eager to get positive results in front of fellow Singaporeans, friends and family. There will be close matches between Singapore and teams like Malaysia and Philippines. Hopefully, home support will give us the edge.”

Added women’s national captain Alvinia Owyong, 29, who has been the skipper for the last 2 years: “Home support is what drives us to keep working hard and playing our best. The women’s team is working hard to make the finals of both the SEA 7s and the SEA Games. We have an experienced squad with no major kchanges and we all look forward to doing well on home soil.”

National players in the heartlands to drum up support for HSBC Singapore Rugby 7s. Members of the national 7s teams, incluing Owyong and Isharf, were at NEX shopping mall in Serangoon Central this afternoon to unveil the Samurai-sponsored national jerseys. Besides sharing their thoughts on the upcoming SEA 7s, the players also demonstrated rugby moves like a scrum and a line-out to an appreciate audience in the heartlands of Singapore.

Rugby fans keen to support Singapore and the Southeast Asian teams in the SEA 7s can head to Yio Chu Kang Stadium on 14 April as admission is free. For the final of the SEA 7s to be played at the HSBC Singapore Rugby 7s. Prices for children and adults start from as low as S$2 and S$50 respectively.

Due to popular demand, organisers have released an additional 300 new Platinum tickets priced at S$300 per person. The Platinium two-day passes come with special accreditation, a free 70-page tournament booklet, plus limited alcoholic drinks, two buffet meals and snacks from the dedicated Platinum Bar. Ticket holders also have access to the After Party at Clarke Quay on both nights. The new tickets go on sale immediately and are strictly limited till stocks last. 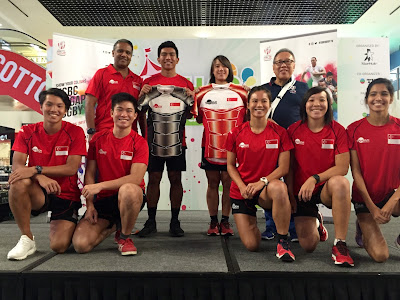 Expect to ROCK, RUCK and RUMBLE at the 2017 HSBC Singapore Rugby 7s this Easter, with sixteen of the world’s best rugby sevens teams, always-on live entertainment, top-notch cuisine, interactive games for the whole family and tantalising prizes on the menu. Fans are encouraged to arrive in home-made costumes and fancy dress to “show your colours” in support of their favourite teams.
For tickets to the HSBC Singapore Rugby 7s please visit www.singapore7s.sg

Everydayfoodilove.co/ angeline-ong-yoga.blogspot.com. Thank you for reading our posts. Our team media coverage touches mostly on lifestyle events and focuses on happening scenes in Kuala Lumpur and Kota Kinabalu. Invite us for food reviews, travel and hotel reviews, KL clubbing reviews and product launches. Our other interests include the movies, technology and photography. Subscribe to my facebook page. Contact us via my email at: [email protected] or [email protected]
Advertorial Rugby Singapore Sport