Harley-Davidson of Singapore and Rugby Singapore today announced the launch of an exciting partnership. The signature roar of the Harley-Davidson adds a huge rumble to the HSBC Singapore Rugby 7s, taking place at the National Stadium on 15 and 16 April. 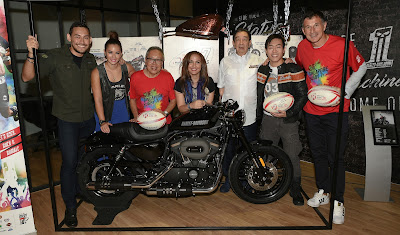 The Harley-Davidson® Roadster™ combines stoplight-to-stoplight power, agility, and “made in Singapore” custom artwork inspired by South East Asia’s biggest sporting extravaganza. One lucky ticketholder will roar away from the National Stadium on this superb, one-of-a-kind Harley-Davidson and this lucky winner will be announced at the National Stadium on Sunday, 16 April.

Partnership with Rugby Singapore is a first for Komoco Motorcycles
“For over a century, Harley-Davidson has been synonymous with dreams of personal freedom and the pursuit of the great outdoors,” said Mr Teo Hock Seng, Managing Director of Komoco Motorcycles Pte Ltd . “Our brand has championed the passion and openness of our riders, regardless of age, gender, culture and race – and the universal language of a sport like rugby makes us proud to be a new partner of the HSBC Singapore Rugby 7s.” 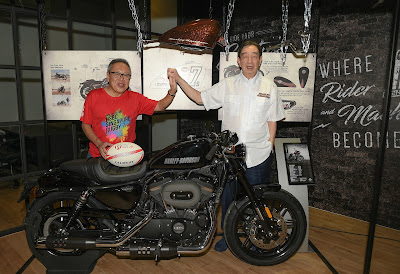 Mr Low added, “Some of rugby’s core values are engagement, integrity, solidarity, passion and strength, and every one of these resonates with what Harley-Davidson brings to the partnership. There will be several more exciting activations closer to, and at, the tournament itself. So watch this space!”

7 Harley-Davidson Motorcyles travel along a Figure of 7 Route at Partnership Launch
A host of rugby loving celebrities and influencers like actor-host Paul Foster, popular TV host Claire Jedrek, singer Ming Bridges and actor-director Luke Lee were on hand to witness the glittering launch of the partnership at Harley-Davidson of Singapore’s showroom on Alexandra Road this afternoon.

To mark the occasion, guests rode on seven Harley-Davidson motorcyles which went on a special ‘Figure of 7’ rumble route that started and ended at the Harley-Davidson showroom.

The convoy of 7 motorcycles left Komoco Building via Leng Kee Road, before entering Commonwealth Avenue and then made its way up to North Buona Vista Road. From then, the convoy made a left turn, proceeded towards Portsdown Road junction before making a u-turn back to Commonwealth Avenue, and ending the ‘rumble’ at Leng Kee Road. Enthusiastic bystanders waved to the convoy as it rumbled its way through the late afternoon traffic.

Range of ticketing options for families and rugby fans
This Easter, ROCK, RUCK and RUMBLE at the 2017 HSBC Singapore Rugby 7s, with sixteen of the world’s best rugby sevens teams, always-on live entertainment, interactive and fun games at the Activity Zones for rugby fans young and old. Join fans from around the world as they “show your colours” with fancy dress and home-made costumes” in support of their favourite teams and players.

Rugby fans keen to own their very own Harley-Davidson motorcyle should grab tickets to the HSBC Singapore Rugby 7s right away.

Category One two-day season pass priced at S$150 (free seating) are still available, together with only a handful of the additional Platinum S$300 tickets (reserved seating with food & beverage). Family packages range from S$260 (two adults and two youths or child under 12), S$140 (one adult and one child under 12) and S$180 (one adult and two child under 12). Those seeking exclusive hospitality can consider the Sevens VIP Club package priced at S$1,600 for two days of world-class sports entertainment action.

All prices are subject to booking fees and taxes. To purchase tickets, visit www.singapore7s.sg

Everydayfoodilove.co/ angeline-ong-yoga.blogspot.com. Thank you for reading our posts. Our team media coverage touches mostly on lifestyle events and focuses on happening scenes in Kuala Lumpur and Kota Kinabalu. Invite us for food reviews, travel and hotel reviews, KL clubbing reviews and product launches. Our other interests include the movies, technology and photography. Subscribe to my facebook page. Contact us via my email at: angel_line78@hotmail.com or monicaong@hotmail.com
Advertorial Harley-Davidson Media Coverage Singapore