A five-star achievement, five crowning values and a five-year anniversary inspire the first of five new packages. Palace Hotel Tokyo is celebrating the finer things in life this May with a new package crafted for seekers of a sophisticated stay experience. 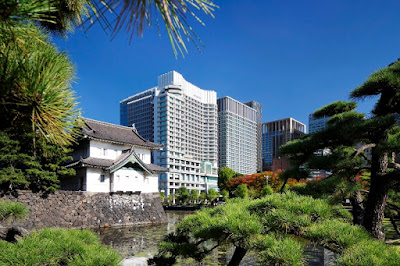 The Imperial Palace's Tatsumi Watchtower sits across the moat from Palace Hotel Tokyo.

The “Discerning Tokyo” getaway highlights world-class offerings at the hotel while also introducing guests to the capital city’s imperial heritage. The experience includes:

● A JPY 10,000 credit with which to splurge on cocktails & canapés at Royal Bar, crafted by “World’s Best Bartender” winner Manabu Ohtake.

● A three-hour, privately guided “Astute Aesthetes” tour entirely tailored to each guest’s interests, with cultural options such as Akasaka Palace, which recently expanded its access to the public, as well as the majestic gardens that surround the home of Japan’s imperial family (and are conveniently located just across the moat from the hotel).

Situated on the sixth floor, Crown reveals sweeping views of the Imperial Palace gardens and moats, as well as Tokyo’s skyline. Though the view is distinctly Japanese, the menu is contemporary French, as Chef Ichizuka collaborates with Patrick Henriroux, grand chef of the two-starred La Pyramide in Vienne, France, on the restaurant’s concept and menus. Earlier this year Ichizuka won 2nd place in the prestigious Prosper Montagné 2016 competition, which stands as a testament to the three decades he has dedicated to mastering French culinary arts.

The Royal Bar is helmed by Manabu Ohtake, who in 2011 topped 10,000 competitors to be named the "World’s Best Bartender" by leading alcoholic beverage company Diageo.

Several floors below Crown’s perch, in the hotel’s grand lobby, is the second highlight of the stay, Royal Bar. Last month, the intimate drinking spot was named on the inaugural “Asia’s 50 Best Bars” list, a collection by Drinks International. The bar is helmed by Manabu Ohtake, who in 2011 topped 10,000 competitors to be named “World’s Best Bartender” by leading alcohol purveyor Diageo.

Earlier this year, Forbes Travel Guide awarded Palace Hotel Tokyo its coveted Five-Star rating, the only independent Japanese brand ever to achieve such recognition. As the hotel approaches its fifth anniversary, it’s cultivating five bespoke stay experiences over the next year, with “Discerning Tokyo” as the first. 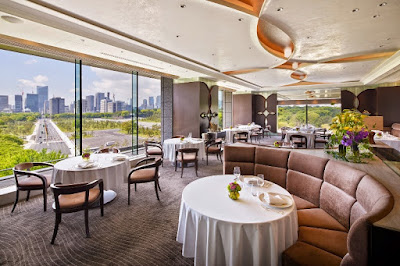 Crown restaurant has sweeping views of the Imperial Palace Plaza and the city's skyline.

Each tailored package takes inspiration from one of the brand’s five core values, all of which are reflective of the guest experience Palace Hotel Tokyo aims to deliver. “Discerning Tokyo” celebrates the first core attribute, “Global Best”, which is indicative of the hotel’s undeniably high standards and salutes the numerous awards & accolades it has received. Amongst the other gems represented by the five dots in the hotel’s crown logo are “Harmony with Nature” and “Ultimate Personal Time”, with the rest - as well as the packages each inspire - to be revealed over the next year.

Rates start at JPY 230,000, not inclusive of taxes and service charge. Learn more.

ABOUT PALACE HOTEL TOKYO
Opened in May 2012, Palace Hotel Tokyo commands some of the city’s most exclusive real estate. As heir to a legacy going back more than half a century as one of the city’s most iconic properties, the hotel remains committed to offering Japanese hospitality at its finest.

Drawing deeply from the country’s history, culture and art, the award-winning hotel redefines luxury in Japan with sophistication and authenticity, presenting guests with the most bespoke cultural experiences to be had in Tokyo.

Located at 1-1-1 Marunouchi, the hotel is a 10-minute walk from the landmark Tokyo Station and mere steps away from Marunouchi Naka Dori, a picturesque, tree-lined boulevard that serves as one of Tokyo’s most posh shopping and dining destinations.

Everydayfoodilove.co/ angeline-ong-yoga.blogspot.com. Thank you for reading our posts. Our team media coverage touches mostly on lifestyle events and focuses on happening scenes in Kuala Lumpur and Kota Kinabalu. Invite us for food reviews, travel and hotel reviews, KL clubbing reviews and product launches. Our other interests include the movies, technology and photography. Subscribe to my facebook page. Contact us via my email at: angel_line78@hotmail.com or monicaong@hotmail.com
Accommodation Advertorial Hotel Tokyo Travel