We just couldn't resist the craving for sushi one day, so we drove down to Karamunsing Kompleks to dine at this rarely visit Japanese restaurant, Usagi. 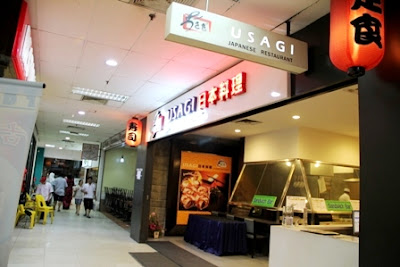 
With the sudden surge in number of Japanese restaurants opening around town, its good to revisit some of the older establishment that has been around for awhile, and to reminiscence how this place made us feel when we first stepped into the establishment during their opening week .

The place was nice and peaceful, not the least being tucked away at a less congested area of the mall, it was a bit empty on a Sunday afternoon, so its a nice place to avoid the usual noisy weekend crowd.

Food wise, is was not bad, with the sashimi being generally fresh, although the rice seemed to be a bit more broken than other Japanese establishments. Other than that, there was nothing to complain about, and their staff were also friendly and attentive to your needs.