Genting Highlands – 26 June 2019 - It was a race to be the last (cold) man standing in Resort World Genting’s recent Sub-Zero Challenge. Braving frigid temperatures with only a minimal amount of clothing, 31 Malaysian journalists from 18 media accepted the Sub-Zero Challenge to win some amazing prizes.


“Life is all about challenge and I hope our media friends enjoyed this unique challenge here today,” said Katherine Chew, Vice President of Resorts Communication and Public Relations. “Genting Highlands is known for its amazingly cool mountain weather and Snow World is beloved for its recreation of a European winter; we have taken this to a new extreme today by turning it into a polar region for the Sub-Zero Challenge. This is just one of the many interesting ways that we can ‘twist’ our attractions in Resorts World Genting into a whole new world of fun and challenge. So look forward to more of this!”

Snow World was first opened in 2003 but closed down in 2011 to undergo a major revamp that cost RM15 million. It opened again on 31st August 2013 with an expansion to fit 250 visitors in the snow chamber per slot, making it the largest snow attraction it Malaysia. The revamped Snow World is a European Winter Wonderland that spans an area of 22,800 square feet. And at a chilly -6°, you can experience the thrill of sliding down on a toboggan or engaging in a fun snowball fight. There is also so much more than just snow, with the 3D trick art and photo opportunities spread around in the chamber. 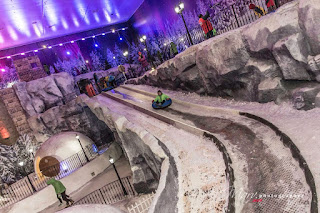 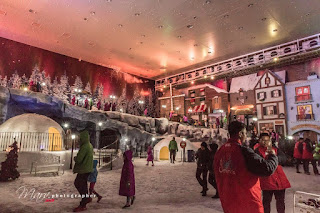 The rules were simple. A contingent of Resort World Genting’s media friends made the trip to Resorts World Genting, with some choosing to accept the challenge and others preferring to cover the event from the safety of temperatures above 0 degrees. Held at the resort’s popular Snow World, the space was transformed from a twinkling Alpine village into an Antarctic base camp with constant temperatures under -6 degrees Celsius for the event. For those that did not fear the cold, the rules were simple – stay in Snow World for as long as possible with only a single layer of clothing under the standard jacket, boots and gloves provided.

“It was freezing!!” said Siti Ampuan binti Azizan & Asriana Binti Ahmad from New Sarawak Tribune who came out after fifty-three chilling minutes inside. “I usually like the cold, but with one layer of jacket, this was not for the faint hearted. We only had mobile phones and power banks as distractions, and let me tell you… mobile phone batteries drain very fast below zero degrees to counteract the cold. But it was a fun experience.”

One hour later, another brave challenger fell out, Athirah from InTrend Magazine said “I really thought I could pull through but I just can’t”. Which left us with twelve challengers from ten medias. 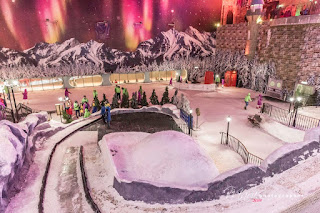 At the third hour, a tie breaker was implemented where participants have to take off their jackets. All that was left was the one layer of clothes they came with. At this point, it was all about mental will and physical endurance. It was half an hour later that seven challengers came to an agreement to walk away with the consolation prize. Lokman Hakiem Abd Samad from Ideaktif said “I thought I would be the strongest person that can stay in -6 celcius the longest. But, I was wrong. They are others who are better than me. Most of us stayed more than 3 hours and that was more than the expected time. No one would like to give up. But after our jackets were taken, we still did not admit defeat instead we became a team. We all took our breaks together and came back in together. Alas, after 3 hours 31 minutes, I and my partner choose to step out. Not because we don’t want to win, but we allow the others a chance to do so.”

Then it came down to the strongest five – Eddy Ong from Xuan Play, Iqram Rosli and Muzzamil from Bernama News Channel, Zamir Akmal Zambri from Media Prima, Brian Lee from Like Media and Nik from Astro Gempak – who faced off in a battle of mental will and physical endurance. And finally, after three hours and forty-nine minutes, the cold proved too much for the strongest five. All five came out of Snow World with a solid proposal. They’ve decided to split all their winnings, and came out all winners! “Our hands and feet started cramping, we couldn’t feel our face anymore and we had to come to a conclusion. All of us stood in a circle to discuss the best possible way to all come out as winners. So we decided to split our prizes. Some decided to take home the trophies while others take home the stay at the hotel. It was a win-win for everyone” said Iqram Rosli. 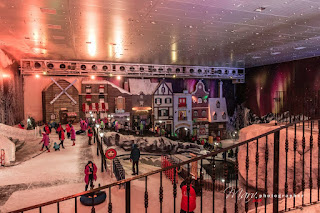 
Everydayfoodilove.co/ angeline-ong-yoga.blgspot.com. Thank you for reading! We are currently expanding our reach in South East Asia to bring more for your next leisurely consideration. Our media team does media coverage for a wide variety of topics, ranging from Lifestyle events, HoReCa (Hotel, Restaurant and Cafe) reviews, Upcoming Clubs and Product launches. Our other interests also include but are not limited to dance, fitness, movies, technology and photography. Please subscribe to our facebook page. If you would like to get in touch with us, please contact us via email at [email protected], [email protected], or [email protected]
Antartic Resorts World Genting Snow World