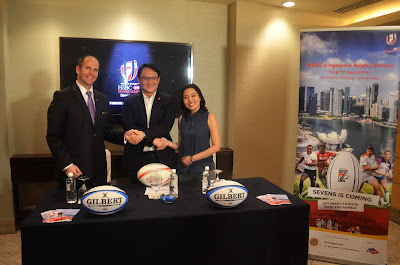 “We are delighted to be the official hotel for the HSBC World Rugby Singapore Sevens, said Gino Tan, General Manager, Pan Pacific Singapore. “Our hotel is no stranger to the sport, having been one of the official SEA Games hotel in June 2015, and having housed both the Rugby and Billiards teams, we are able to anticipate the special requirements of the rugby players and look forward to welcoming all 16 teams to Pan Pacific Singapore in April.” 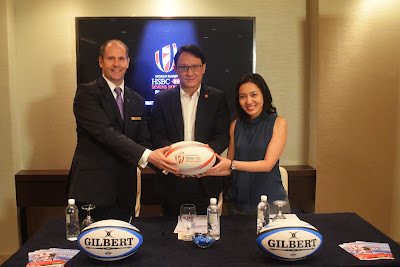 In addition to hosting the teams, Pan Pacific Singapore is offering Singapore Sevens ticket holders special savings on beverages at its Atrium lounge located in the heart of the hotel. The spectacular Atrium lounge is an eclectic collection of seating pods floating over a reflection pool and provides a stunning backdrop as you sip on premium beers, wines, spirits and Pacific-inspired cocktails. The hotel is also offering a Bed and Breakfast room package for guests, which includes complimentary breakfast for two persons and a 20% savings on dinner at Keyaki, Hai Tien Lo, Edge, Pacific Marketplace and Atrium at Pan Pacific Singapore. 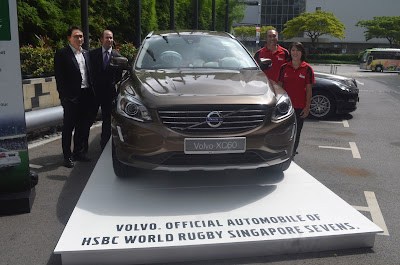 In partnership with Official Car Volvo, Pan Pacific Singapore is also offering a two-night weekend staycation in a Panoramic Room, inclusive of daily breakfasts for two persons, for the top winner of the “Guess the Number of Rugby Balls in the Volvo XC60 and Win” contest.

The “Guess the Number of Rugby Balls in the Volvo XC60 and Win” contest will run from today till 25 Feb at Pan Pacific Singapore, followed by the HSBC World Rugby Singapore Sevens roadshow at Clarke Quay from 26-28 Feb, and finally end off at the Volvo roadshow at Suntec City from 7-13 March. 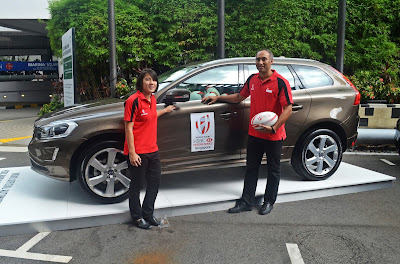 “Volvo has always been a strong supporter of major sporting events. We are excited and privileged to be the Official Automobile of the HSBC World Rugby Singapore Sevens Series, back in Singapore for the first time in ten years,” shared Ms Sabrina Sng, General Manager, Wearnes Automotive Pte Ltd (Volvo). “Our Volvo S80 Luxury Sedans and XC60 Luxury SUVs are excellent reflections of athleticism and dynamic performance. With their presence, we are confident that they will help to enrich the vitality and energy of a marquee sporting event such as this.”

The Volvo XC60 car filled with rugby balls will be displayed at Pan Pacific Singapore (18 to 25 Feb), Clarke Quay (26-28 Feb) and Suntec City (7-13 March). Simply snap your best photo of the Volvo XC60 on display and post the photo on Volvo’s facebook page (facebook.com/VolvoCarsSG) with your guess of the number of balls. The 3 closest guesses will walk away with attractive prizes worth Our Partners  up to $1,488, courtesy of Pan Pacific Singapore and the lucky winners will be announced on Volvo’s facebook page on 14 March. Terms and conditions apply.

Singapore relishes home advantage for inaugural South East Asia Sevens
• SEA 7s will be a boost to regional rugby development
• 14 national teams (8 men, 6 women) confirmed for tournament in Singapore
• Men and Women finals will be played at the National Stadium on Day One of the HSBC World
Rugby Sevens in Singapore

The SEA 7s kicks off at Yio Chu Kang Stadium on 15th April (Friday) at 11am and to encourage more support from local and overseas rugby fans, admission to the day-long tournament is free. The SEA 7s men and women’s finals meanwhile will be played the next day at the iconic Singapore National Stadium on Day One of the HSBC World Rugby Singapore Sevens.

"The SEA 7s is a key pillar in promoting the game of rugby 7s in the region and is a platform for players around the region to not only compete, but learn from each other and from the best in the world during the HSBC World Rugby Sevens in Singapore," said Low Teo Ping, President of Singapore Rugby Union. "Creating the SEA 7s tournament was key in our strategy of using the Singapore 7s as a catalyst for development of the game in South East Asia. The SEA 7s will provide unions regular opportunities to play as a region and to help each other improve.”

“For any player who has ever donned the national jersey, the privilege to play in front of your home supporters, with your friends and family in the stands, that is a once in a lifetime opportunity,” said men’s team captain Daniel Marc Chow. “We had tremendous support at last year’s SEA Games tournament and our aim is to qualify for the SEA 7s final. It will be a dream if we can ignite the Kallang Roar and win the tournament in front of the home fans.”

Agreed women’s captain Alvinia Ow: “We are playing in our own backyard, so nothing is more important than going for gold. Yes, the pressure is always on the home team but we should fear nothing and play our hearts out. The chance to run out onto the field in front of our home supporters and contest the final during the HSBC World Rugby Series is motivation for us to work even harder in the weeks to come.”

Ticket prices to the HSBC World Rugby Singapore Sevens ranged from SGD 50 to SGD 150 for adults, while Category 2 and 3 tickets for children under 12 are only SGD 2. All prices exclude booking fees and tickets are available online at www.singapore7s.sg

Everydayfoodilove.co/ angeline-ong-yoga.blogspot.com. Thank you for reading our posts. Our team media coverage touches mostly on lifestyle events and focuses on happening scenes in Kuala Lumpur and Kota Kinabalu. Invite us for food reviews, travel and hotel reviews, KL clubbing reviews and product launches. Our other interests include the movies, technology and photography. Subscribe to my facebook page. Contact us via my email at: angel_line78@hotmail.com or monicaong@hotmail.com
Advertorial Event Rugby Singapore Sport