Showing posts from July, 2019
Show all

Anantara Hotels, Resorts & Spas has received a total of twelve top accolades in the 2019 Travel + Leisure World’s Best Awards. Readers of the prestigious US magazine recognised seven individual Anantara properties across the highly coveted categories and Anantara was ranked among the very best hotel brands in the world.
Post a Comment
Continue Reading...

Travellers can now discover the uniquely local and diverse charms of Thailand’s capital city with the opening of Avani Sukhumvit Bangkok hotel, bringing the brand’s signature experiences to the cosmopolitan neighbourhoods of On Nut and Phra Khanong in the ‘City of Angels’.
Post a Comment
Continue Reading...

The slow-food movement has crawled almost to a standstill in the lush uplands of Bali where the Chedi Club Tanah Gajah Ubud is now plating lunch and dinner fare sprung largely from the grounds of the resort.While farm to table movements are on the rise around the world, Chef Khairudin ‘Dean’ Nor thought he might do the movement one better by cutting out the costs of transportation almost entirely.
Post a Comment
Continue Reading...

Tivoli Hotels and Resorts is thrilled to announce that the brand was voted number four in the Top 25 Hotel Brands in the Travel + Leisure 2019 World’s Best Awards. Every year, Travel + Leisure magazine runs a worldwide reader survey to select the best in many different categories across the travel and hospitality industry.
Post a Comment
Continue Reading...

The Sofitel Legend Metropole Hanoi has unveiled a new collection of handmade, preservative-free mooncakes, presented in beautiful decorative boxes, ahead of the 2019 Mid-Autumn Festival, which kicks off September 13.
Post a Comment
Continue Reading...

McDonald’s Malaysia with its charity of choice RMHC Malaysia invested a grand total of RM9 million in various CSR activations throughout 2018. McDonald’s Malaysia and Ronald McDonald House Charities (RMHC Malaysia) were both celebrated for their inspiring efforts in the socio-economic transformation of Malaysia at the CSR Malaysia Awards 2019.
Post a Comment
Continue Reading...

The Westin Resort Nusa Dua, Bali takes great pleasure to announce the recent appointment of Anil Kapoor as Executive Chef. He has arrived on the island direct from an 18-month stint in a similar role at The Yacht Club Canberra, a multi-faceted venue with a high-end parliamentary clientele.
Post a Comment
Continue Reading...

With the spirit of Hari Raya Aidilfitri still in the air, Resorts World Genting continues with the season of giving and generosity by hosting a group of underprivileged children for a fun-filled day at the resort recently.
Post a Comment
Continue Reading...

Uncage Your Skills with Rio Ferdinand at Tiger Street Football 2019 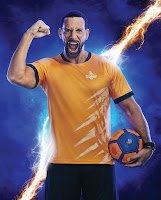 Tiger Beer, Malaysia’s No. 1 beer, is taking football back to the streets with the return of Tiger Street Football. Tiger Street Football tournaments will soon be coming to a town near you – providing a platform for streetwise stars to uncage their skills and prove that they have what it takes to be the best. Following a series of Regional Qualifiers kicking off in July, the top-rated teams will compete against each other at the Grand Finals to find the ultimate champions. The winners will walk away with a cash prize of RM10,000, a trophy presented by legendary football star and Tiger Beer Brand Ambassador Rio Ferdinand, and of course, the ultimate bragging rights!
Post a Comment
Continue Reading...

Welcome in the summer at Prince Hotel. add@Prince has prepared exquisite oysters dishes during its dinner buffet, alongside white peach afternoon delights over weekends across July and August. From 1 July to 31 August, every child aged 3-8 can dine for free when accompanied by three paying guests during the lunch, afternoon tea or dinner periods*.
Post a Comment
Continue Reading...

Available from 1 July to 31 August, Three on Canton’s talented chefs will present bird’s nest and fruit-inspired dinner buffet, showcasing an array of fresh and seasonal fruity appetisers, main dishes and bird’s nest desserts to keep you cool and energised throughout summer.
Post a Comment
Continue Reading...

Malaysia’s Family Friendly Golf and Country Club, TPC Kuala Lumpur is kicking off its Friday Poolside Barbeque Buffet starting 28 June 2019 from 6.00 pm to 10.00 pm. Live cooking stalls next to the Olympic size pool with stunning views of its championship golf courses will make a perfect weekend for your friends and family.
Post a Comment
Continue Reading...

Lick It, Crunch It and Indulge in the Creamy Crunch Experience with the Oreo Chocolate Coated

After a debut year packed with excitement and accolades, Four Seasons Hotel Kuala Lumpur ushers in its first anniversary with a month-long celebration featuring curated events, glamorous dining and incredible savings. It’s the perfect opportunity to return for another remarkable Four Seasons experience, or to immerse in the Hotel’s exceptional facilities for the first time.
Post a Comment
Continue Reading...

Lose Weight and Stay Healthy by Cooking & Sharing with Friends

January is always the same. Everyone feels bloated after several weeks of cookies, comfort foods, champagne, martini's and chocolate. At the same time, the local gyms and designer work out clothing lines are pounding out special deals like no tomorrow, protein shake ads pop up on social media, and Marie Osmond convinces you to try her mail order meal plan.
Post a Comment
Continue Reading...

After giving customers a taste of Korea with the beloved Spicy Korean Burger, McDonald’s Malaysia will now be taking Malaysians on an exciting taste journey to another corner of the world with the brand new Portuguese Chicken Burger!
Post a Comment
Continue Reading...

#MakeSomethingGoodHappen with Cadbury this Ramadan

Cadbury Dairy Milk Malaysia introduces new messaging with campaign that encourages generosity. Cadbury, the world’s best-selling confectionery brand under Mondelēz International has announced its new local direction themed Make Something Good Happen – spotlighting the values of people that go over and above for others, the cheerful optimists, the ones that surprise others with small gestures, the people that embody the “Make Something Good Happen” spirit with little acts of generosity that bring people closer together.
Post a Comment
Continue Reading...

The Amelioration of a'Roma Dinings

One foggy night in PJ, Hah! I remember this establishment very fondly and with good reason. I first debuted into the blogging scene back in May 2016, to the surprise and interest of many in the community. Who was this middle-aged scoundrel of a gentleman gallivanting about the food scene as if he owned the place Did I not, well it felt like I did ? A chance meeting with the beautiful and passionate Angeline Ong , who is the owner of this blog and of which I am an Associate Writer and Editor, led me into the fascinating world of Food Blogging. I visited a'Roma Dinings as my 18th foray in that same year, the older write-up of which is still accessible here . And like me and this blog, a'Roma Dinings has certainly matured well as a business and as an establishment offering authentic Italian fare and more. Step inside with me dear reader, and allow me to unfetter your inhibitions about this world famous cuisine.
Post a Comment
Continue Reading...

Resorts World Genting has an interesting show lined up for the whole of this year until next. Yours truly had the opportunity to go up and catch it over a weekend, and let me tell you, it was amazing. The show was a spectacular incorporation of many talents from around the globe. Named the IMAGINATRICKS , which is an amalgam of the words Imagination and Tricks, the performances are being held at the Genting International Showroom and will run from 25 May 2019 until 24 May 2020.
Post a Comment
Continue Reading...

Genting Highlands – 26 June 2019 - It was a race to be the last (cold) man standing in Resort World Genting’s recent Sub-Zero Challenge. Braving frigid temperatures with only a minimal amount of clothing, 31 Malaysian journalists from 18 media accepted the Sub-Zero Challenge to win some amazing prizes.
Post a Comment
Continue Reading... 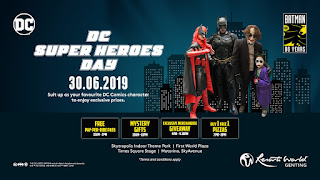 Genting Highlands – May 9, 2019 - First appearing as socialite turned crime-fighter Bruce Wayne in DETECTIVE COMICS #27 on March 30, 1939, the Dark Knight has stood as a symbol of determination, bravery and justice to generations of fans for 80 years. He has influenced every area of modern entertainment, appearing in countless comic books, cartoons, multiple television series, video games, theme parks and experiences, toys, collectibles, apparel and lifestyle products, as well as, blockbuster animated and live-action films.
Post a Comment
Continue Reading...
More posts