Six months after opening its doors in the heart of this city’s historic district, the Al Bait Sharjah is emerging as one of the region’s most ambitious new properties, renowned for the five historic homes at its foundation and for its overwhelming dedication of human resources. 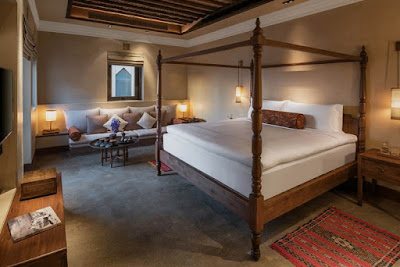 Eight years in the making, the 53-room resort by GHM debuted in marked contrast to the world-famous hotel towers of nearby Dubai, cultivating a low-slung profile and an aesthetic that celebrates indigenous building design and materials. Its historic barjeel, or wind tower, punctuates the district’s age-old appeal. A museum worthy of stand-alone status signals the ambitions of the hotel, and the city, to showcase the emirate’s particular heritage.

“The very act of checking into this resort is like an immersion into the depths of the city’s incredible heritage, said Patrick Moukarzel, the resort’s general manager. “If what we want as travellers is an experience of place that is completely singular to that place, Al Bait is it.” 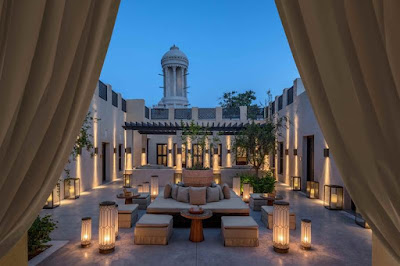 The name of this new Leading Hotel of the World -- Al Bait -- means home in Arabic and is reference both to the intimate atmospherics of the property’s design, and to the five residential chambers at the heart of the new property.

The homes are each named for former inhabitants, and resound with their original purpose as residences that did double duty as a post office, a customs’ house and a salon or majlis, for the city’s intellectual elite. Its coral building blocks and gypsum have stood the test of time. A multi-gallery museum tells the story of one of the original inhabitants, the commerce that made his fortune, and a city that’s decided its past is not dead -- it’s not even past.

One hundred eighty seven employees service the resort’s 53 rooms, a ratio that’s almost double the average in Asia, and far higher than in the West.

“For many of our guests, this kind of palatial service is, in fact, just like home but for others it’s an extraordinary experience out of the Arabian Nights,” said Moukarzel. 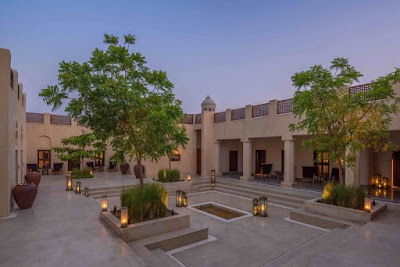 The hotel’s accommodation ranges from 31 - 44 square metres (334 - 474 square feet) in the deluxe rooms to 102 square metres (1,098 square feet) in each of the resorts two grand suites. Its decor marries an Arabian ambiance to Far Eastern minimalism. Traditional rugs carpet floors. Some rooms give way to outdoor patios, and some to the Souq Al Arsah, the oldest in the UAE.

In the Café, the space is as renowned for its aromas as its pastries. In the Ice Cream Shop, camel’s milk competes with cow’s milk as the principle ingredient of the preferred scoop. 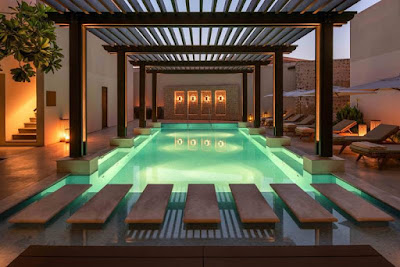 The 500-square-metre spa offers three treatment rooms for women, and two for men, including separate relaxation lounges, hammam, steam and sauna, as well as hot and cold plunge pools for women. The gym features upmarket equipment, as well as zones for stretching, strength training, cardio and kinesis. The resort’s main pool is 15 metres.

The Al Bait Sharjah is managed by GHM (General Hotel Management Ltd). The resort was developed by Shurooq, the Sharjah Development and Investment Authority, as an anchor to its landmark Heart of Sharjah project.

Everydayfoodilove.co/ angeline-ong-yoga.blogspot.com. Thank you for reading our posts. Our team media coverage touches mostly on lifestyle events and focuses on happening scenes in Kuala Lumpur and Kota Kinabalu. Invite us for food reviews, travel and hotel reviews, KL clubbing reviews and product launches. Our other interests include the movies, technology and photography. Subscribe to my facebook page. Contact us via my email at: angel_line78@hotmail.com or monicaong@hotmail.com
 Advertorial Accommodation Al Bait Sharjah Hotel