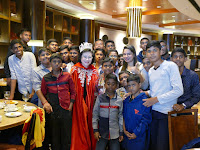 Genting Highlands, 9 December 2018 – It was a day of magic and merriment as Resorts World Genting recently hosted over 300 underprivileged children from 10 homes to a Harry Potter-themed Christmas Party. In keeping with the season of caring and sharing, the children were treated to a delicious Christmas lunch, a magic show, a song-and-dance performance and a showing of Dora the Explorer LIVE! Search For The City of Lost Toys.
The day began with the children making their journey up to the cool climate of Resorts World Genting, welcomed and greeted by Santa Claus himself. The happy and expectant group were then led to Coffee Terrace at Genting Grand, which had been transformed into the Hogwarts School of Witchcraft and Wizardry for the occasion. As the children claimed candies from Puan Seri Cecilia Lim and were entertained by Santa & a magician dressed up in characters from the Harry Potter book series, VIPs from Resorts World Genting arrived to mingle and play with the children, including guest of honour Puan Sri Cecilia Lim, wife of Genting Group chairman and group chief executive Tan Sri Lim Kok Thay.

A blast of gold confetti by the guest of honour, Puan Seri Cecilia signalled the start of the party, she then invited her friends up to the stage for Christmas carolling – singing “we wish you a merry Christmas” and “joy to the world”. As they finished, the emcee announced that lunch is served, allowing the children to tuck into a traditional Christmas lunch with the tune of timeless Christmas carols. Children were rushing to all seven stations that in Coffee Terrace, Puan Seri Cecilia and friends helped served each child at the western station. The children were in awe of the chocolate fountain, popcorn stand, ice-cream stand, dessert galore and varieties of dishes. Hailing from ten homes – Rumah Kanak-Kanak Tengku Budriah, Sivananda Boy’s Home, Sivananda Home Kuala Kubu Bahru, Rumah Victory Children and Youth Home, Shepherd’s Centre Foundation, Pertubuhan Kebajikan Anak Yatim Mary KL, Love Eternal Charity Association, Angels Children Home, Rumah Keluarga Kami, Agathians Shelter – the halls were filled with the sound of children’s laughter and chatter over lunch.

They were entertained by GAPS Studio students – who have prepared 6 different dance & singing performances to entertain the crowd. It continued with two dances performance from Pertubuhan Kebajikan Anak Yatim Mary KL and Angels Children Home. Next up was the magician that took to the stage for a Harry Potter-themed magic show, it was an interactive show where children participated in all the acts.

After the thrills of the show and the comfort of the meal, Malaysian singing sensation Queenzy for a song-and-dance session. Set to the tunes of disco songs, Queenzy invited Puan Seri Cecilia, friends and the children to get on their feet and join the dance party, twirling and moving in celebration of the season. After a chance to catch their breath, the children then saw Santarina emerge with a sack of presents – personally selected by each child from a wishlist provided by Resorts World Genting. Ranging from Barbie Dolls, board games and bicycles to sports shoes, school uniforms and story books, each present brought broad smiles to the face of each child. A goodie bag with a Resorts World Genting shirt and Faber-Castell stationary was also given to the children, because Christmas is an experience that is not complete without gifts.

“What we have done here today is all for the children, because they represent the unlimited potential and infinite possibilities for our future. They are the next generation,” said Puan Sri Cecilia Lim. “This is the season of giving, and we at Resorts World Genting want to ensure that these children do not miss out on the magic of the season and are given the tools and boost they need to succeed. Harry Potter himself had a difficult childhood, and he still grew up to be one of the greatest wizards of his generation. That’s possible for these children as well, and we would like to provide all the help we can give to help them on their journey.”

After a group photography session, the children then trouped off to the Genting International Showroom to watch a showing of the musical extravaganza Dora the Explorer LIVE! Search For The City Of Lost Toys. Featuring the hero of many children, the stage production chronicled the adventure of Dora and her friends as they explore a mysterious city to retrieve her lost teddy bear Osito. Resorts World Genting representatives then bade goodbye to the children, who will surely remember the day as one of their greatest Christmas experiences ever.

Everydayfoodilove.co/ angeline-ong-yoga.blgspot.com. Thank you for reading! We are currently expanding our reach in South East Asia to bring more for your next leisurely consideration. Our media team does media coverage for a wide variety of topics, ranging from Lifestyle events, HoReCa (Hotel, Restaurant and Cafe) reviews, Upcoming Clubs and Product launches. Our other interests also include but are not limited to dance, fitness, movies, technology and photography. Please subscribe to our facebook page. If you would like to get in touch with us, please contact us via email at angel_line78@hotmail.com, monicaong@hotmail.com, or michael.marvin.photography@gmail.com.
Children Genting Highlands Resorts World Genting