Showing posts from November, 2018
Show all

On Sunday, 18 th  November 2018, it was a night to remember as a new star lit up Kuala Lumpur’s glittering cosmopolitan skyline with the grand opening celebration of Four Seasons Hotel Kuala Lumpur.
Post a Comment
Continue Reading...

Empire by Zouk, Hip Hop high up in the clouds at Resorts World Genting

Genting Highlands, 29th November 2018 – When you mention clubbing to anyone in Malaysia, the Zouk brand immediately comes to mind. This is the standard that has been set by Zouk which originated in Singapore which was voted third best club in the world in the DJ Mag Top 100 Clubs DJ Ranking. The clubbing experience in the country is about to get bigger and better than ever with Zouk Atrium which will encompass the main club Zouk, Empire by Zouk, RedTail by Zouk, RedTail Karaoke as well as a RedTail BBQ outlet and Fuhu a new vibe dining restaurant in 2019, all in one trendsetting space. Empire is one of Zouk Genting’s two club outlets, and one of the newest concepts introduced under the Zouk umbrella. The idea behind Empire stems from a hip-hop themed, dual club-lounge that is reminiscent of the upscale, private lounges in New York. Empire by Zouk opened its doors on 21st November to invite all lovers of hip hop, fashion and to anyone who simply loves to party.
Post a Comment
Continue Reading...

Foodie fans – are you ready to be taken on a street food adventure? Malaysia’s No. 1 Beer, Tiger, is bringing convention-challenging takes on Asian street food to light with the upcoming Tiger Uncage Street Food Festival.
Post a Comment
Continue Reading...

Recently I am using this SEERS 3 Second hot water dispenser at home which I think is a fantastic product around now. As you know if you keep reboiling water overtime it will cause harm to drink and not very cost effective on your electricity consumption.
Post a Comment
Continue Reading...

Season' To Be JOLLY with Berjaya Times Square Hotel

Feel nostalgic this festive season with your loved ones. Enjoy the traditional Christmas decorations, carefully curated by The Westin Kuala Lumpur’s heavenly team. The Westin Kuala Lumpur will take on the Classical Christmas tones featuring a range of traditional reds and greens, reindeers, snowflakes with hints of mulberry and pine cones. Relish in extensive and flamboyant delicacies in its All Day Dining, Italian or Chinese Restaurant.
Post a Comment
Continue Reading...

KUALA LUMPUR, October 2018 - Tiger Beer, Malaysia’s No. 1 Beer, kickstarted its Uncage campaign earlier this month with the launch of its brand film featuring three Malaysian uncaged heroes. Im Cheah, Herukh Jethwani and Jun Chan shared their experiences of challenging street food conventions and the ways they overcame their fear to follow their dreams. Tiger Beer wanted to give media a sneak peek of what these uncaged heroes have in store for the upcoming Uncage Street Food Festival later this year and hosted an intimate get-together for guests to meet the inspiring Malaysian chefs.
Post a Comment
Continue Reading...

Yeah Cuisine is a hidden germ located in a secluded area of Ampang’s neighbourhood. Yeah Cuisine offers varieties of Hakka style home cook, old school comfort food that will remind you of your childhood. They done an outstanding job on their signature pork patty dish, make from their family secret recipe which is marinated and cooked for 1 hour to make the patty tender and juicy. You can choose a few different flavour pork patty from Original, Mui Choi, Tong Choi, Salted Fish, Dried Squid and Coriander to go with an options of rice or noodles and it's serve with a bowl of soup.
Post a Comment
Continue Reading... 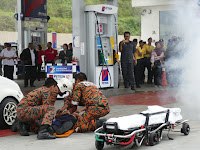 Genting Highlands, 30 October 2018 – It is a ritual that all motorists go through, driving into a petrol station to fill their vehicle’s tank up, then once done, drive off to their destinations only to repeat the same routine again regularly. But what most drivers aren’t aware of are the strict safety rules that govern a petrol station. A stray spark – even from using a mobile phone, or a cigarette – could lead to a fire incident. In recognition of the need to educate drivers, consumers and station operators of proper behaviour at petrol stations, the Malaysian Ministry of Domestic Trade, Cooperative and Consumer Affairs (KPDNHEP), Pahang State Securities, Resorts World Genting and fuel retailer Petron jointly organised a Petroleum Station Safety Awareness Campaign on 30 October 2018.
Post a Comment
Continue Reading...

The Great Eastern LIVE GREAT Run is back! For the first time, the run started in the evening at an exciting new venue, Bukit Jalil National Stadium. Whether you are a serious runner or a casual runner, there's something exciting to suit everyone.
Post a Comment
Continue Reading...

Sofitel Legend Metropole Hanoi has named Raphael Kinimo as the hotel’s new Executive Sous Chef. The French national has worked in some of the world’s top kitchens and hotels and brings more than two decades of culinary experience to Vietnam’s most storied hotel. In his role as Executive Sous Chef, Raphael will help oversee the culinary team, under the helm of Executive Chef Paul Smart at the hotel’s iconic upscale French restaurant Le Beaulieu.
Post a Comment
Continue Reading... 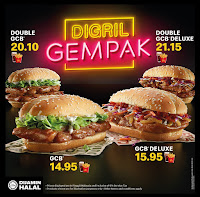 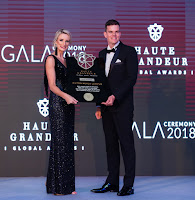 Avani Hotels and Resorts has launched the fifth instalment of the #AvaniMe YouTube series, this time starring South African musician, TV host and actor Kat Sinivasan on an action-packed 24-hour adventure through Livingstone in Zambia. Every #AvaniMe episode aims to inspire travellers to visit Avani destinations, and the latest is no exception, highlighting the unmissable natural and cultural wonders surrounding the world’s largest waterfall ( www.avanihotels.com/en/me/24hrswithme ).
Post a Comment
Continue Reading...