2 and 3 September 2017 welcomed the 2017 FIM Asia SuperMoto Championship to one of the highly prestigious global motorsport circuit, the Thailand Circuit Motorsport Complex, witnessed a significant change to the SuperMoto landscape in Thailand. The Thai community and families across the world flocked to the circuit over the race weekend to see the beginning of another fantastic Asia SuperMoto season with 17 riders from 13 countries competing for standing points and the championship title. While it can be considered as a good omen to steal the opening round trophy, the journey is still far away from the ultimate crown this season. 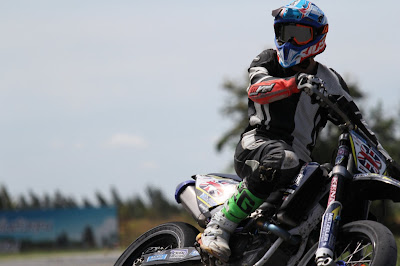 Last weekend we saw some great and not-so-great rides by the riders with some flying through the triple dirt section and long straights but held back the rest with under expectation performance on the track. United Kingdom’s Lewis Cornish, Thailand’s Trakarn Thangthong and the Netherlands’ Marcel Van Drunen took the top position with high flying performance across the track despite the changes in condition on the dirt track.

The threatening weather from a scorching sun to a cloudy weather and a torrential downpour at night turns the tide as riders braved through the rutted dirt track without a full understanding of the dirt’s condition. With a 4:6 ratio of dirt track against tarmac, the off-road section became the game changer of the championship. 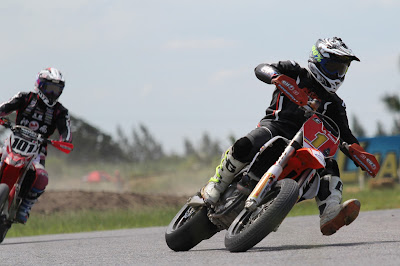 This was evident when Malaysia’s ace and 2016 overall champion missed a few whoops and ran into trouble at the third dirt section, in addition to a total brake malfunction in Moto 2. The frustration led him to mistakes as he missed the first dirt section two laps before the chequered-flag, riding straight into the asphalt, giving him a time penalty. Muhd Habibullah currently stands at the fourth overall positioning.

However, Lewis’ adaptability to the circuit with a double holeshot for Moto 1 and Moto 2 gave him an advantage as he leads the pack with an empty course in the first lap, leaving the second and third grid positioning Trakan and Habibullah to an ardent battle. Soon after the crash by Habibullah at Moto 2, Trakarn sped and challenged Lewis for the top spot, but it was Lewis that outshined the 2015 overall champion for a solid win at the opening round. 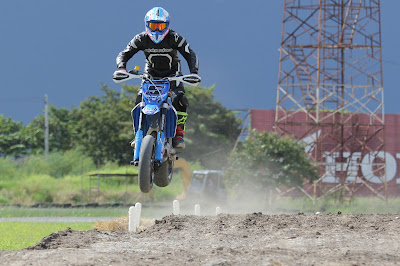 Meanwhile, Habibullah’s Malaysian counterpart, Khairi Zakaria also faced multiple challenges when Netherlands’ Marcel Van Drunen targeted him as the opponent on track. The brawl between the duo soon became the spectator’s favourite with when they constantly battle for the third positioning, but it was Marcel that aced the fight and fled for his next opponent soon after distancing himself from Khairi.

Other notable riders will be Indonesia’s Farhan Hendro and Philippines’ Kenneth San Andres. Both riders had a slow start during the free practice session on Friday and Saturday morning, but they unleashed their skills during Moto 1 and Moto 2, making them two of the most promising riders this SuperMoto season. 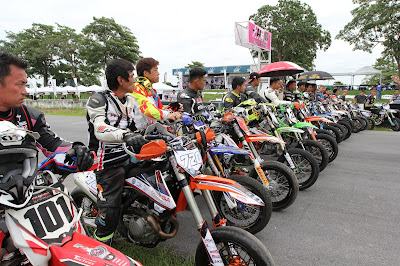 “The opening round was an astounding start to the season. Top riders across the world recognise the championship as a prestigious race to uplift their portfolio. With an increasing standard and extended outreach this season, I believe that our global fans will be treated to one of the best motorsport races in 2017,” said Satheswaran Mayachandran.

The 2017 FIM Asia SuperMoto Championship season will be streamed live on twenty3.tv powered by E-Plus Global, an Over-The-Top platform that provides HD Live Streaming and Video-on-Demand (VOD) for every round of the championship.

For more information, visit www.supermotoasia.com or watch the race live for f ree in HD on www.twenty3.tv powered by E-Plus Global Sdn Bhd.

ABOUT ASIA SUPERSPORTS GROUP SDN BHD
Asia Supersports Group Sdn Bhd (ASG) is a group established with decades of motorsport and event experience in the industry. Pioneering in the sports of SuperMoto, ASG has catapulted to international fame with its organisation of the annual FIM Asia SuperMoto Championship. The group’s passion for motorsport also led to the establishment of the Malaysian SuperMoto Championship which has successfully elevated the hybrid sport’s status in Malaysia. By championing quality race production for fans and enthusiasts, the group is now a step closer to achieving its goal as a top global motorsport promoter.
www.supermotoasia.com

ABOUT E-PLUS GLOBAL SDN BHD
Incorporated in 2004, E-Plus is a full-fledged, one-stop events management company. This multi award-winning agency is the brainchild of a dynamic team that provides innovative and creative ideas in both event planning and execution events for clients, both locally and internationally. Recognised as one of the top and more experienced agencies in the region, the company continuously seeks to elevate industry practices through its unique, creative and innovative ideas. Listed on the National Stock Exchange of Australia earlier this year, E-Plus (NSX:8EP) operates mainly from Malaysia, has offices in Hong Kong, Indonesia, Philippines, Singapore and Thailand and is a member of the distinguished Association of Global Events Suppliers (AGES).
www.eplusglobal.com

Everydayfoodilove.co/ angeline-ong-yoga.blogspot.com. Thank you for reading our posts. Our team media coverage touches mostly on lifestyle events and focuses on happening scenes in Kuala Lumpur and Kota Kinabalu. Invite us for food reviews, travel and hotel reviews, KL clubbing reviews and product launches. Our other interests include the movies, technology and photography. Subscribe to my facebook page. Contact us via my email at: angel_line78@hotmail.com or monicaong@hotmail.com
Advertorial Sports SUPERMOTO ASIA Thailand