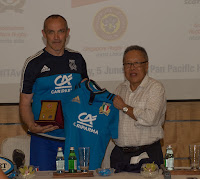 Following three pulsating Super Rugby games and the exciting 2017 HSBC Singapore Rugby 7s tournament, the iconic Singapore Sports Hub is set to host the biggest game this rugby season with the first ever international test between two Tier One nations – Italy versus Scotland - this Saturday 10 June. 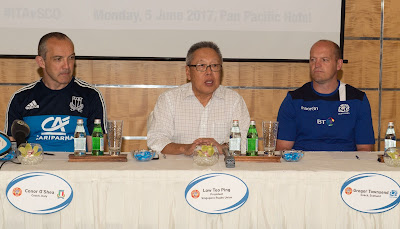 For world number five Scotland, it will be coach Gregor Townsend’s first game in charge and he will be hoping to get his tenure off on a winning note.

“I’ve managed to spend the last few weeks working with the players, getting to know them and putting together a game plan,” shared Townsend at today’s pre-match media conference. “The players have worked hard over the past few years, they now have the confidence and success has started to come. I’m here to build on that momentum and help the team improve even further. With improving comes winning and I want all the players to reach their full potential and to win more games.”

Scotland, led by skipper John Barlcay, won three of their five Six Nations matches this season, including a 29-0 win over Italy at Murrayfield in March. In contrast, Italy were winless in their Six Nations campaign and are looking to turn things around. 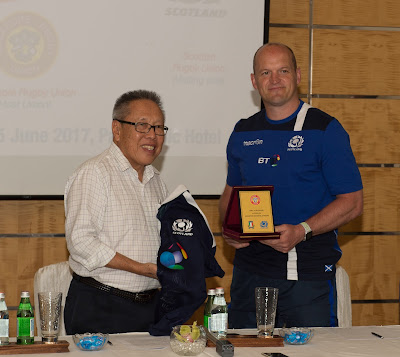 Ranked 15th in the world, Italy are the ‘home team’ for this Saturday’s and coach Conor O’ Shea believes that a win over Scotland is not beyond his men.

“There is a difference between Italy and Scotland but it is not a massive difference,” he said candidly. “Our guys don’t get all the resources that others do, but we are making fundamental changes for the future and we have just brought in a conditioning coach. Our goal is not to be winning World Cups, it is to change Italian rugby for the future. Scottish rugby has showed that if you make the right changes, you can make rapid strides and catch up very quickly. Our job this weekend is to put a little more pressure on Scotland and take our chances instead of missing them all.”

Italy has beaten Scotland eight times in past twenty-seven meetings, most recently at Murrayfield in 2015. Last November, the Azzurri even beat world number four South Africa 20-18 for the first time ever, to receive a standing ovation in Florence.

This Saturday’s Italy-Scotland clash will be their third encounter on neutral soil – Scotland won 18-16 in Saint Etienne (2007) and 30-29 in Pretoria (2013) but Italian and neutral fans will certainly be hoping for a reversal in Singapore.

“This is the first ever test match played in Southeast Asia between two Tier One rugby nations and it will be a classic,” explained Low Teo Ping, President of Singapore Rugby Union. “Importantly, both teams are not just here to play a match, they will also engage the local rugby fraternity and businesses. Test matches like this helps to grow the fanbase of rugby in Singapore, but will also grow the sport in Southeast Asia which has a population of over 620 million.”

Added Scottish coach Townsend: “It’s exciting to be able to play in such a unique stadium and the fact that it’ll be Scotland’s first International there will make for a great occasion. We hope having two European teams playing here will inspire players, coaches and more youths to watch the game for the first time. For those who are passionate are rugby, they will know that Singapore is a country that is really embracing rugby.”

Tickets for this once-in-a-lifetime Test match are still available. Premium tickets are priced at S$80, while Category 1 and 2 adult tickets for S$50 and S$20 respectively. Under 18s get a 50% discount on tickets for Category 1 (S$25) and Category 2 (S$10), while 12-s tickets cost S$1 only. A small booking fee applies on all tickets. 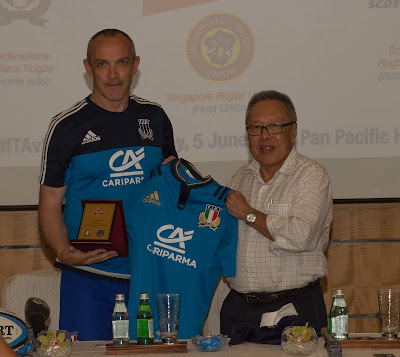 To purchase your tickets, visit www.sportshub.com/itavsco, while overseas fans can purchase them from www.stubhub.sg

Everydayfoodilove.co/ angeline-ong-yoga.blogspot.com. Thank you for reading our posts. Our team media coverage touches mostly on lifestyle events and focuses on happening scenes in Kuala Lumpur and Kota Kinabalu. Invite us for food reviews, travel and hotel reviews, KL clubbing reviews and product launches. Our other interests include the movies, technology and photography. Subscribe to my facebook page. Contact us via my email at: angel_line78@hotmail.com or monicaong@hotmail.com
Advertorial HSBC World Rugby Rugby Singapore Sport