Hera is the story of beggar’s chicken: During the federal dynasty with the imposed heavy tax on civilians, people were deprived of everything. There were beggars everywhere. One day, a beggar was floating in Changsu of Jiangsu Province, cold and hungry. Little by little, he couldn’t stand up and fainted. His fellow sufferers were trying to save him. They collected wood and burned it to warm him up. One fellow sufferer took out the only remained chicken and prepared to cook for him. But without any tools to cooking, they were very worried. Suddenly, one of them got an idea, by wrapping the chicken with slush then put it in the mud pie into fire to bake. They continuously collected wood and baked mud pie. Finally, when the chicken was fully cooked, they began to knock open mud. To everyone’s surprise, the feather was also falling off with mud, and the chicken smelled very nice. The aroma attracted all neighbors and they couldn’t stop praising the unique cooking style and the unique taste. 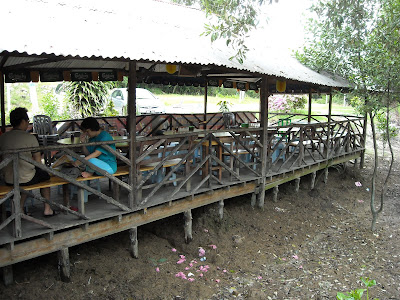 We have been planning for this Beggar chicken's trip with our gang for a week. The restaurant is in a kampung house with a kitchen and the eating area built on stilts, made of mangrove wood, over a small area of mangrove swamp, where a lots of mud skipper fishes thrived . This is the original Beggar's chicken restaurant. The various dishes must be order at least two days in advance because of the tedious process involved in setting up the charcoal fired mini kiln. The marinated food are wrapped in two layers of cake paper, a layer of thick brown grease proof paper, tied together, covered with red earth clay and left to cooked for 4 hours. The drive from the Banting, Kesas Highway junction to Jugra took about 45 minutes passing by Banting town-full of textile shops and meandering by idyllic kampung houses and the Royal Mausoleum. The road were uneven and bumpy on some stretches but the good food made up for it.
The mini kiln-with the food buried in the hot amber-takes 4 hours to cook-the few packs on the left are for our table.

Beggar pig's trotter, RM51and Traditional rice, RM38
It was also full of herbal flavor (similar to the chicken) some hint of 5 spices too-meaty and skin was smooth and soft to the bite, you can just forget about cholesterol for today. Traditional rice, glutinous rice, filled with mushroom, dried shrimps and dried oyster-seasoned with dark soy sauce and was soft, dry,sticky and a bit burnt on the side

De boned ikan tenggiri then stuffed with fish paste, deep fried till firm and springy. The traditional fish is actually saitoh fish or ikan parang. The flesh was scrap off from the bone and minced repeatedly before some seasoning is added. The gluey fish paste is then attached to the head and tail to be deep fried 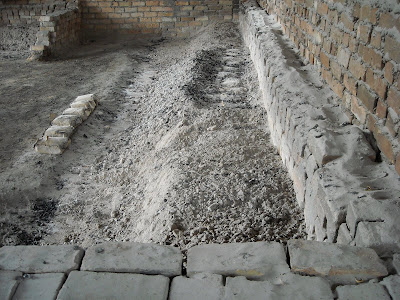 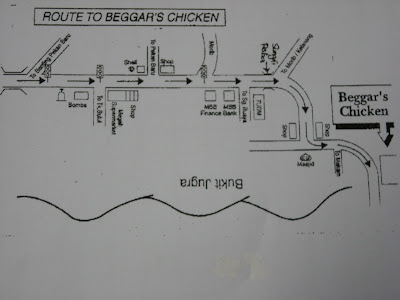