By Snifff - February 10, 2010
The past two weeks (two Sundays in a row) I have been visiting Wild Honey for brunch so that i can give a decent review of the place. "Wild Honey" is located on Level 3 Mandarin Gallery along Orchard Road.

Wild Honey is designed and decorated to look like the owner's home back in New York. Rather laid back and Scandinavian like decor. It is a beautiful place to relax and chill out or bring your dates. They serve all day breakfast and is open from 9.30am till 9.30pm.

Nothing to fancy and fussy, simple European like decor and it is rather cosy and small and gets a tad noisy when its full house. The lights are yellow and dim with music playing in the background. Ouuuu by the way you see the ang moh at the back, i think he is the owner! I was told off for taking pictures of the place but luckily he did not see me taking pictures of the food! Seriously! Whats the deal? But it is ok, after all I managed to get pictures for blogging material. 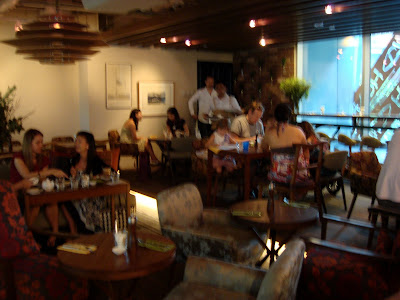 The menu is written on a chalkboard and when words fail, graphic representation can take over by scrolling the pictures of the food through two of the ipod touch that is placed at the counter. Most of the breakfast menu is eggs related and associated with different countries such as Canada, Europe, Scandinavia, Italy, Yemen and Tunisia just to name a few. Interesting indeed!
As i was enjoying my cup of coffee that was served a tad too hot for my liking i was also perving on the article about Tiger Woods! But back to the coffee, i think it wasn't froth nicely and it came too burning hot but taste wise its thumbs up from me. However, i think the coffee is overpriced! I think it is about $6 or so ... seriously it is even more expensive than a cup of latte in Max Brenner (AUD $5 a cup) which is considered slightly more premium than normal cafes in Melbourne (average aud $3.50 a cup of latte). 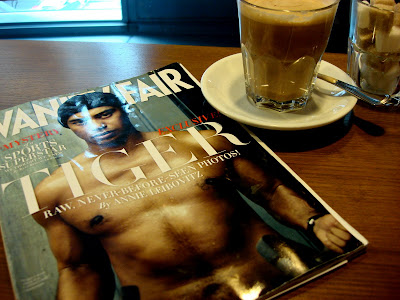 Obviously I picked my fave on the menu which was the eggs benedict or in wild honey's menu "the European". Basically their version uses brioche bread instead of muffin bread or normal toast or ciabatta bread. Instead of ham they use prosciutto. Poached eggs checked. Hollandaise sauce checked. Something different was the field mushroom. 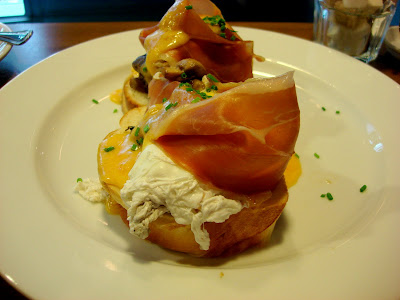 The dish is visually stunning but lets see if it delivers in the taste department! Well the poached eggs came perfectly poached =) Not overly cooked or undercooked! Which is done exactly to my liking. 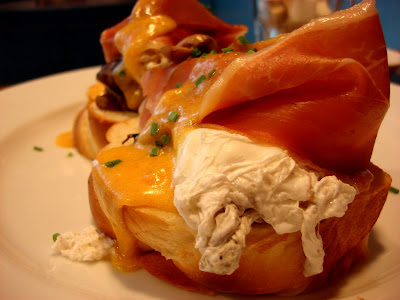 The brioche bread is heavenly and i think it really complemented the whole texture of the dish really well. Normally the bread is slightly toastier but this is perfect. 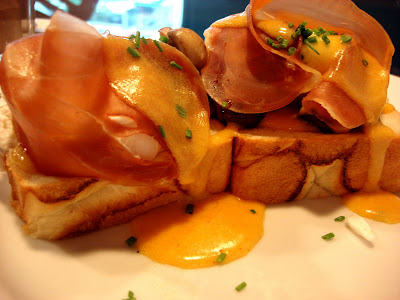 The Hollandaise sauce was great and the brioche soaks up the sauce and the eggs really well. It was really good and to top it off the proscuitto ! Well the proscuitto did not fail me and i really like this dish a lot! I'd come back for this! 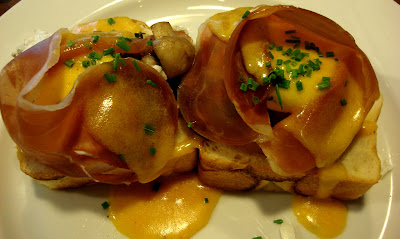 The second time around, I wanted to be a little more adventurous with my choice of food so i opted for the Natural Remedy drink which is basically hot honey water with vanilla and cinnamon. Well, I don't really know what benefit it gives to my body but i did not really enjoy the drink because it was rather spicy. I think the spicy bit came from the cinnamon stick and a little bitter for my liking. 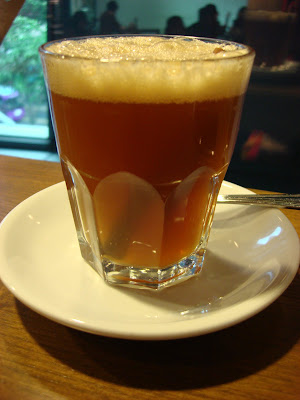 I was so tempted to order the eggs benedict/european again but decided against it just for the sake of giving a better review on this place. So i opted for the Californian. Californian is basically scrambled eggs, green bell peppers, tofu and herbs on 3 pieces of sliced ciabatta bread.

The Californian S$18
Well this dish is good if you enjoy your mushroom and your eggs only. It is definitely almost vegetarian like but eggs ? Nevermind about that. The scarmbled eggs was nice and fluffy and the herbs, tofu and peppers (green bell peppers) was a pretty good combination. However, i personally have issues with the mushroom! I think i was a tad overwhelmed with the mushroom as towards the end of my meal, i was feeling a bit "jelak" from the mushroom. It would have tasted awesome with ham/salmon/proscuitto. But lets focus, there is a reason its call Californian i am sure! 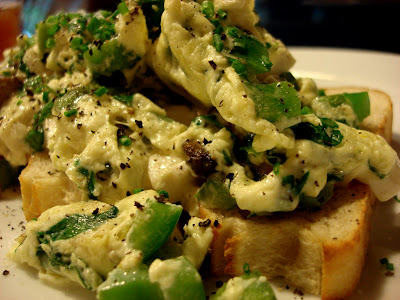 Overall, my dining experience here i would rate it as 6.5/10. I hate the idea that i to sneak around to take pictures. Secondly, the bar stool that i was sitted on was a bit wobbly =P....Thirdly, i didn't like the idea of paying for my food first before i was seated because after all, i am paying service charge NO? Fourthly, i think the food is slightly overpriced. For the same quality of food and price, i would expect better service and ambiance which i can get from other places. But having say that, I will definitely return for more of their eggs benedict when I am craving for it. Definitely worth a try if you are not too tight on your wallet.

As I was going through a rough stage in my life beginning of the year, my father a very wise man told me this and he quote it from somewhere. But his version was "Do not dwell in the past, do not worry about your future but live in the present as the present will link you to your future and your past". Which is a very similar quote from The Buddha:"Do not dwell in the past, do not dream of the future, concentrate the mind on the present moment."


I think this is rather straightforward to reason out. Basically it is just reminding us to not dwell on the past (which i think most of us do at times, we often regret etc) but instead living in the present moment, the NOW and focusing our mind and attention here and take the attention away from thinking of the past and the future. It is NOW that we are able to experience life directly and the past and future are only concepts of our mind that is good for us to learn (the past) and plan (the future). In other words, live life to the fullest every single day. You'll never know if tomorrow will come along.

Namaste and have a lovely holiday!