With the Lunar New Year upon us, reunions are the common synonym that runs with it. And with old classmates making a living elsewhere, we took this never-so-often chance to be reunited over a nice dinner. 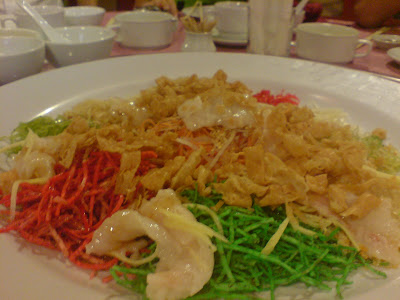 Yee Sang
A tradition for any Lunar New Year dish. To bring good fortune for the coming year ahead. The raw fish tasted pretty good but the rest of this dish was just average. Which is still not too bad. Next up:- 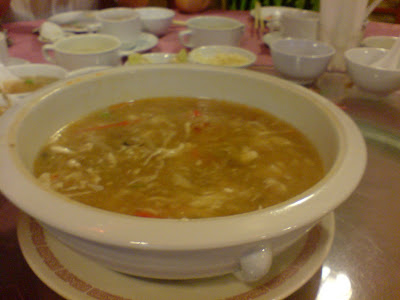 Hot Spicy and Sour seafood Soup
The soup was not too bad, but it still lacked some vital flavors and fragrance. But the bits and pieces of seafood were actually quite fresh and chewy. So not too many complaints here. 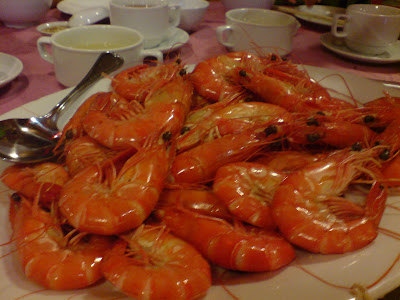 Steamed prawn
This was probably the highlight of the evening. Although it was simple, but it was definitely fresh. The sweetness of the prawn will leave you wanting for much more. The dipping sauce was tasty and packed a punch in the fragrance department. Some prawn were still left unattended in the end but only because we wanted to be polite in the presence of old mates. 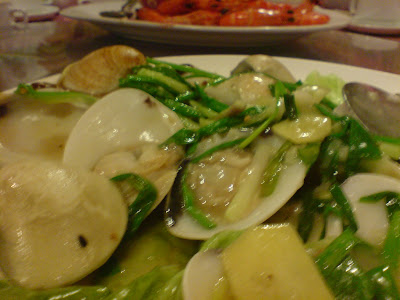 Stir-fried Littleneck Clams with spring onion and ginger
This was also one the nicer dish of the evening, with strong flavor and fragrance released from the sauce and spice. It also had the right amount of sweetness in it, which did not overwhelmed the fresh clam. The clam itself was tender yet maintained the right amount of firmness which can only be achieved by the right stir-frying. 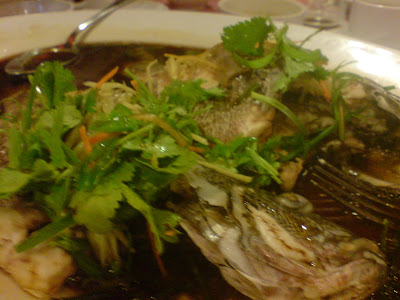 Steamed fish
The fish was nicely done, but it retained quite a bit of its pungent taste. The sauce, (although very nice and tasty) was not strong enough to overcome the slightly heavy fish taste. Overall, it was just average, unless you judge the sauce as a standalone dish. 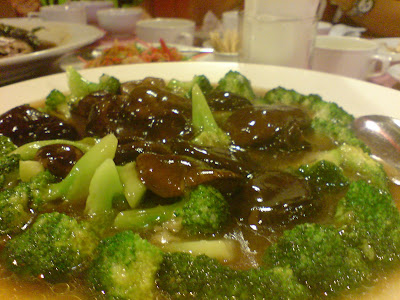 Black mushroom with broccoli
This was also a good dish, although the some of the broccoli weren't exactly bite sized, so we had to clumsily maneuver our chopsticks so as to not make a complete fool of ourselves, and the fact that the sauce had uneven thickness didn't seem to help too. 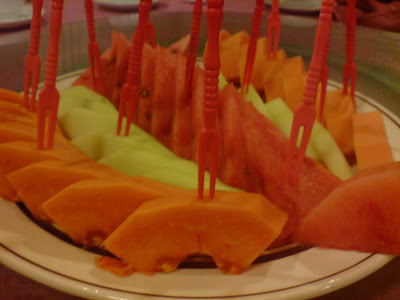 Fruits
Nothing much to say here, just that I need to get the name of the supplier for the papaya. Because I swear the planter poured lots of sugar on the ground from where the papaya tree grew.
Overall, the food was not too bad, but still nothing to write home about (pun not intended).  Dinners come with rice, and they serve good quality rice, not that cheapo stuff. FYI, the dinner set is also available on normal days for small company dinner (or small department) dinner, family reunion, birthdays, etc   Do get a room if its a small gathering. Our room held 20 people comfortably, and there's a karaoke system (albeit playing old school music) which can be utilized till midnight. You can even have the sound system to be adjusted for some small music presentation (I once saw a family reunion with the kids belting out a saxophone melody).
The price, RM570 for a table(10 pax) inclusive  free-flow chinese tea/plain water, which is not too bad.
Bukit Padang Chinese Food DINNER Food Halal Kota Kinabalu Food Seafood Restaurant